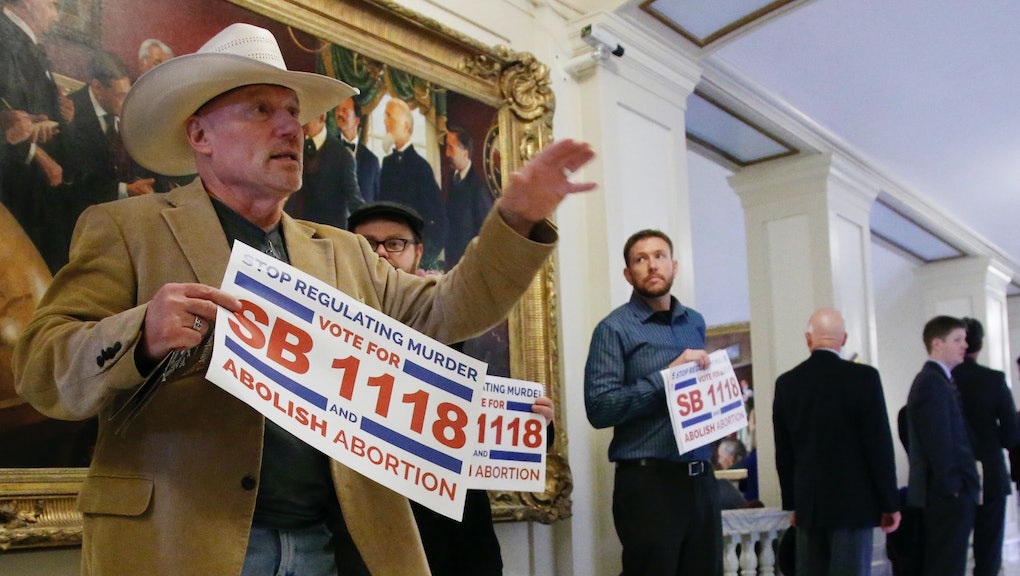 Performing an Abortion in Oklahoma Could Soon Be a Felony

On Thursday, the vast majority of Oklahoma's state senate overwhelmingly voted in favor of a bill banning abortion. Under the proposed law, any doctor who performed an abortion would lose their license and be charged with a felony that carries one to three years in prison.

"Oklahoma's latest bill removes any pretense behind recent abortion restrictions in Indiana, Utah, Arizona and across the country," Dawn Laguens, executive vice president of the Planned Parenthood Federation of America, said in an emailed statement. "These laws are part of a broader agenda to ban abortion, plain and simple."

According to the New York Times, the bill, SB1552, is expected to pass the state senate, in which case it will go to Gov. Mary Fallin, whose track record on reproductive rights puts the bill's passage within the realm of possibility.

While the bill does allow for pregnancy termination if the mother's life is at risk, criminalizing abortion is unconstitutional under Roe v. Wade.

Despite the fact that the Supreme Court recently blocked Louisiana's effort to force the closure of its abortion clinics, other such laws continue to pop up across the country. This year has already seen 411 abortion-restrictive measures proposed in state legislatures; 21 of those laws have been implemented.

"We've seen what this means for women forced to drive hundreds of miles or cross state lines for an abortion," Laguens said. "This cannot be the future our daughters inherit, which is why people across the country are speaking out."