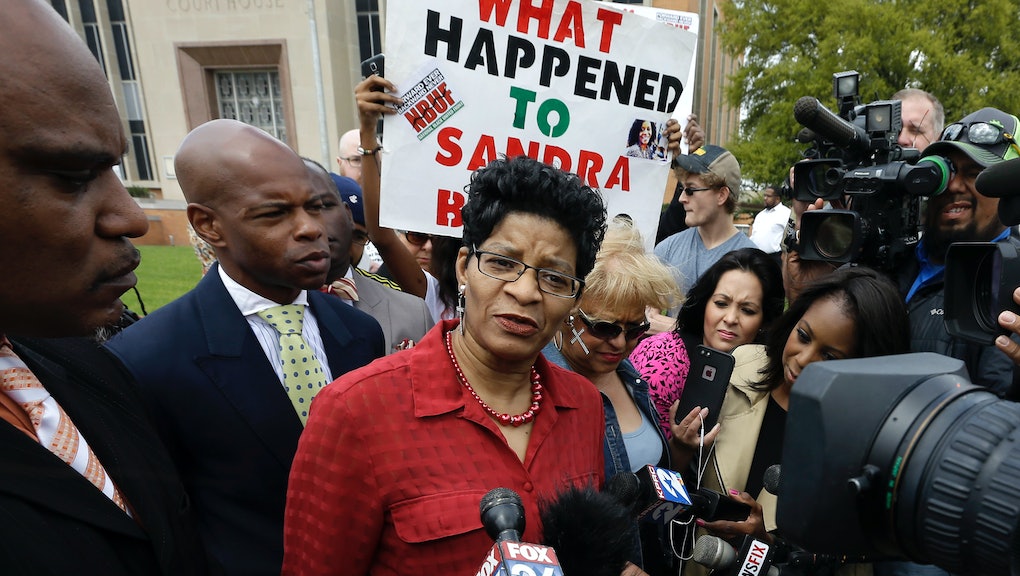 Sandra Bland’s Mom Says Activists Need to 'Get Up, Step Up or Shut Up'

Geneva Reed-Veal is angry. July marks one year since a Texas state trooper pulled her daughter Sandra Bland over for a traffic violation, threatened Bland with a Taser and carted her off to jail, where she died days later.

But weeks of national attention on Bland's case and pledges of support from activists affiliated with the Black Lives Matter movement have yielded few answers about what happened to Sandy, her mother said. In an emotional speech, Reed-Veal said activists have lost their steam at a time when the mothers (and fathers) of African-American men and women victimized by the nation's criminal justice system need them most.

"When the cameras and lights are gone, our babies are dead," she said Thursday during a symposium convened by the Congressional Caucus on Black Women and Girls at the Library of Congress in Washington, D.C. "So I'm going to ask you here today to wake up. Wake up. By a show of hands, can any of you tell me the other six women who died in jail in July 2015 along with Sandra Bland? That is a problem."

In December, a jury declined to indict the Waller County jailers in connection to Bland's death, which authorities ruled a suicide. Brian Encinia, the trooper who arrested Bland, was charged with perjury for allegedly lying in police reports and investigatory interviews about his interaction with Bland. He was fired in January.

Reed-Veal, as well other family members and friends of Bland's, have said they don't believe Bland, 28, would have killed herself. The family filed a wrongful death lawsuit in August, alleging Bland's constitutional rights against unreasonable search and seizure were violated.

The speech from Bland's mother happened at a time when she and other women, whose children's names became hashtags in a fledging social justice movement against nationwide police violence, hoped to leverage that spirit of activism in the upcoming general election.  Reed-Veal, along with the mothers of Travyon Martin and Eric Garner, has endorsed and campaigned for Democratic presidential frontrunner Hillary Clinton, whose platform calls for policing reforms that are drastically different from policies she supported in the 1990s as first lady.

Erica Garner, Eric Garner's daughter, endorsed Vermont Sen. Bernie Sanders in 2015. Sybrina Fulton, Martin's mother, Gwen Carr, Garner's mother and Lesley McSpadden, Michael Brown's mother, each appeared in Beyonce's Lemonade visual album that aired on HBO on Saturday. But Reed-Veal, in her speech Thursday, said the public should not think that what these women are doing is just for show.

"The tears are real, the pain is real, the problem is real," she said. "So, I don't come here playing games with you all. I don't come to sit and be a part of a caucus where we talk and do nothing."

Reed-Veal said she's not ready to "create a riot where I burn things down," but she is going to hold those accountable who promised to support her until she was satisfied that justice had been done for her daughter.

"Movements move," she said. "Activists activate. We have got to stop talking and move. So I leave you with this: It is time to wake up, get up, step up, or shut up."