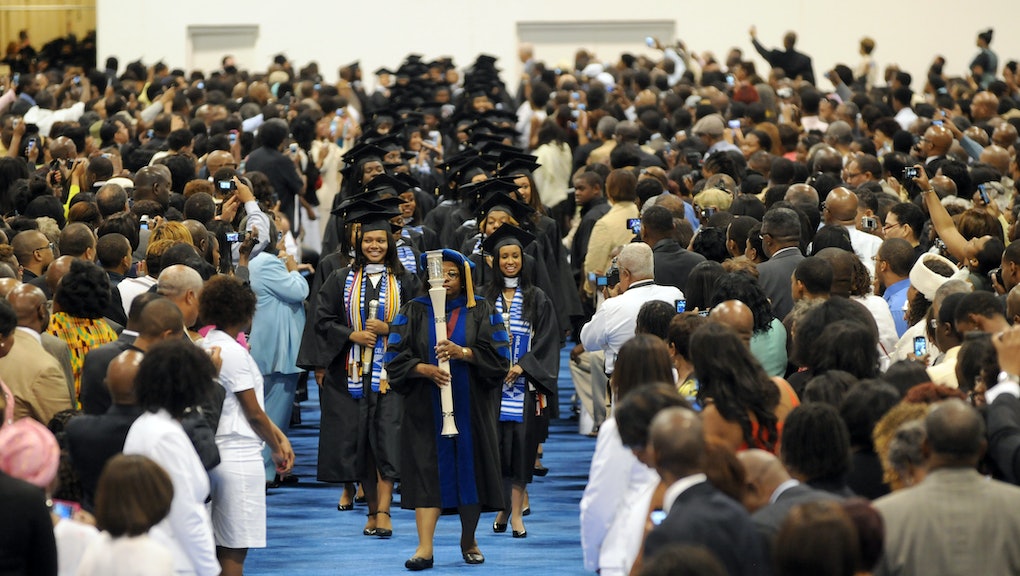 Victim blaming is a problem at Spelman College in Atlanta, says one sexual assault survivor who anonymously tweeted this week to announce she was leaving the school. A Twitter user with the handle "Raped at Spelman" accused the prestigious women's college, which has been ranked the number one historically black college in the nation, of failing to adequately and swiftly address her assault, which occurred at the school:

In 21 tweets, Raped At Spelman highlights the epidemic of sexual assault at HBCUs as well as predominantly white colleges across the nation. But at black institutions like Spelman and its brotherly counterpart, Morehouse College, the college community encourages black women to vigorously defend the image of black men. It's an unspoken understanding: The quest for racial justice trumps the need to call out bad — even criminal — behavior within in the community. This makes substantive conversations about rape and gender discrimination tougher to have.

Raped At Spelman has received many messages of support from current students and alumni of Spelman, Morehouse and other HBCUs. More than 1,780 people had followed the Twitter account as of Wednesday morning.

In an email, college President Mary Schmidt Campbell said the school was investigating the accusations made by the creator of the Twitter account. "Our hearts go out to this student and I want to personally offer her our full support and assistance," Campbell said Tuesday.  "We are a family at Spelman and we will not tolerate any episode of sexual violence. No student should ever have to suffer and endure the experience she has recounted on social media."

In an April statement commemorating national Sexual Assault Awareness Month, Campbell told Spelman students that combating the climate of sexual violence remained a "high priority" for the school. She also announced that students had formed a Sex Discrimination Student Commission, which would advise and collaborate with the administration on issues related to safety and equity for men and women at Spelman

The organizing around sexual assault at Spelman comes just a few months after federal officials responded to student complaints about how Spelman and Morehouse respond to incidents of sexual violence. Last November, the U.S. Department of Education announced that the schools were among more than 150 colleges under investigation for allegedly mishandling reported rape cases.

Spelman, Morehouse and Clark Atlanta University, a third HBCU in Atlanta, hosted Vice President Joe Biden last year as part of the "It's On Us" campaign to prevent sexual assault at colleges. Months later, the Raped At Spelman Twitter account suggests the problem has been slow to change.

Watch Mic's interview with Biden on how to end the rape crisis plaguing college campuses: