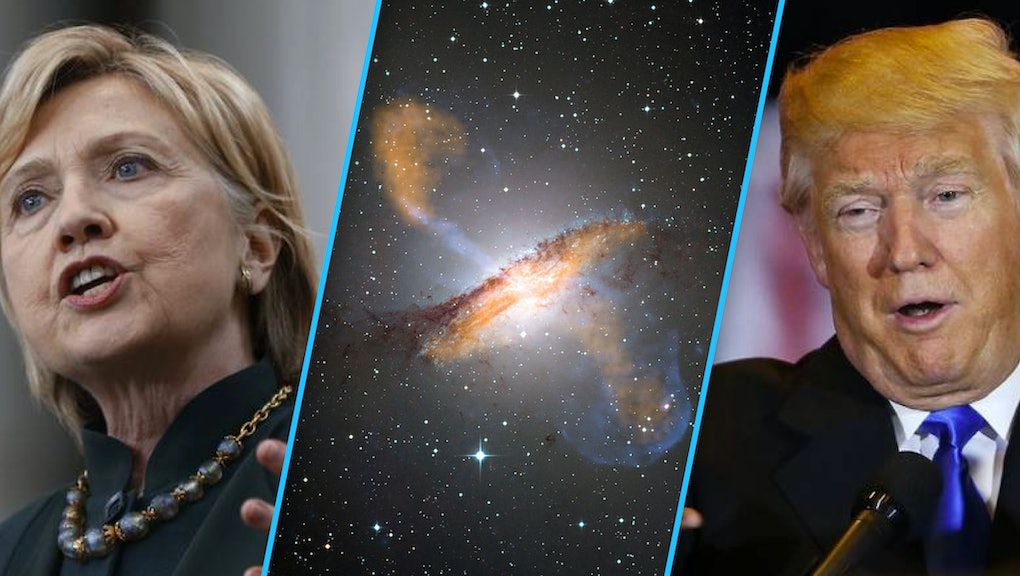 A new U.S. president could mean a new direction for the country's space exploration.

NASA's funding — and, by extension, what space exploration missions it can actually pull off — is closely tied to the president's ideas, and whether or not Congress approves the budget the president asks for.

Now that Donald Trump is the presumptive Republican nominee and Hillary Clinton is getting closer to securing the Democratic nomination, it's worth asking:

How will our space program fare under a Trump presidency or a Clinton presidency?

"NASA has been one of the most important agencies in the United States government for most of my lifetime," Trump said in a recent questionnaire for Aerospace America. "It should remain so."

His opinion about NASA's budget, however, doesn't make it sound like the agency will remain a priority.

"What we spend in NASA should be appropriate for what we are asking them to do," Trump said. "Our first priority is to restore a strong economic base to this country. Then, we can have a discussion about spending."

And as for NASA's plan to send astronauts to Mars in the 2030s, that might be off the table:

"If we are growing with all of our people employed and our military readiness back to acceptable levels, then we can take a look at the timeline for sending more people into space," Trump said.

Hillary Clinton really likes to tell the story of how she wrote to NASA when she was a teenager, asking what she needed to do to become an astronaut. NASA wrote back saying thanks, but no girls allowed. (Thank god that's changed.)

But it seems she harbors no ill will toward NASA. During her first campaign for president in 2008, Clinton said she wanted to reverse NASA's funding cuts.

At a town hall meeting broadcast on C-SPAN last year, it sounded like she hadn't changed her mind. "I really, really do support the space program," Clinton said, adding that the government needs to invest in space exploration, as well as other science and technology initiatives.

Clinton also supports the commercial sector of space, but has said the role of exploration and new discoveries still lies with NASA.

Oh — and that UFO stuff? She's going to "get to the bottom of it" and declassify all the government's secret UFO files.

It sounds like Clinton can count on UFO truthers' votes.