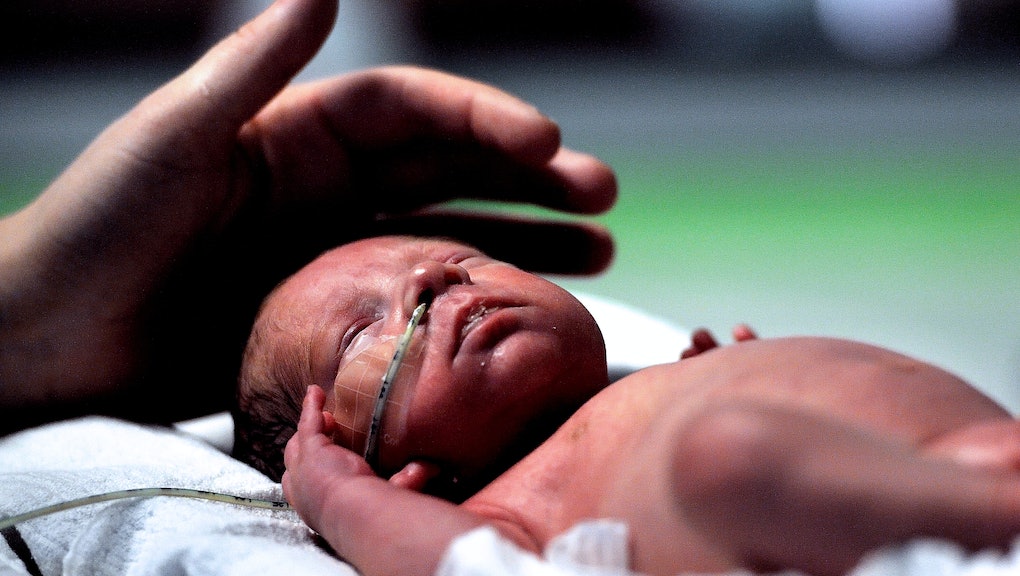 A recent study published in the journal Pediatrics says that swaddling a baby may increase the risk for sudden infant death syndrome, or SIDS. The study's author says swaddling — the popular practice of wrapping an infant so that only its head is exposed — should be stopped as an infant reaches four months. Around that age, babies gain enough mobility to turn themselves over and sleep in a prone position, which increases the risk of SIDS from suffocation or "crib death."

The findings should be of interest to any parent — indeed, the news lit up the mommy and daddy blogosphere. Every year, about 3,500 kids die from SIDS, according to the Centers for Disease Control — most between the ages of 1 and 4 months.

But those statistics are even more striking if you drill down into the data. As public health advocates have been stressing for years, SIDS is an especially big problem among blacks and Native Americans.

According to the most recent data from the CDC, SIDS is more than twice as common among Native-American and black infants as it is for white infants. Latino and Asian infants had the lowest rate of SIDS, with 51 and 35 deaths per 100,000 live births, respectively.

It's important to note that neither science nor the medical community suggests that there is something wrong with black and Native American parents. The high rate of SIDS for black and Native American babies is, in part, reflective of maternal and postnatal health disparities that have existed for far longer than the medical community would like to admit. On a range of indicators linked to socioeconomic status, minorities trail whites in health outcomes.

Socioeconomic disparities between African-Americans and whites can translate into a family's inability to afford a proper crib, housing instability and chronic underemployment. Add the effects of structural racism to that and you have "a recipe for disaster," one public health advocate said.

The good news is that health outcomes for minority mothers and infants are better than they were even a decade ago, thanks in part to targeted public-awareness campaigns, said Laurie Navin, maternal and child health director for the New Jersey chapter of the March of Dimes.

"I think we still need to have a lot of education for multigenerational families who might cling to [child-rearing] traditions that science discourages," Navin said in a phone interview.

SIDS isn't the only area where black women and infants fall behind whites. Premature births, for instance, are far more common for black women than white and Hispanic women. In 2013, 11% of babies were born prematurely, according to March of Dimes data. The rate of premature births for black infants was 60% higher and 44% higher than the rates for white infants and Hispanic infants, respectively.

The reasons underlying the health disparities are complex, but the causes are preventable, said Elizabeth Dawes Gay, a reproductive-justice advocate based in Washington, D.C. "It's really sad, but not entirely surprising because we have a social and health infrastructure that leaves select groups of people behind," Gay said in an email.

Even after accounting for improved awareness of the known risk factors for premature birth — the rates of obesity, smoking and hypertension in expectant mothers — the disparities between white and black infants persist. Gay said that means black women are experiencing a far more diverse range of stressors that negatively impact their health outcomes and the outcomes for their babies.

"In the past few years, we have seen more in the media about maternal health in the U.S. because we are doing so poorly compared to other countries," Gay said. "But I think there could be a lot more done to raise awareness and to push policymakers to take action. Women are dying, babies are dying. It's too important of an issue to ignore."