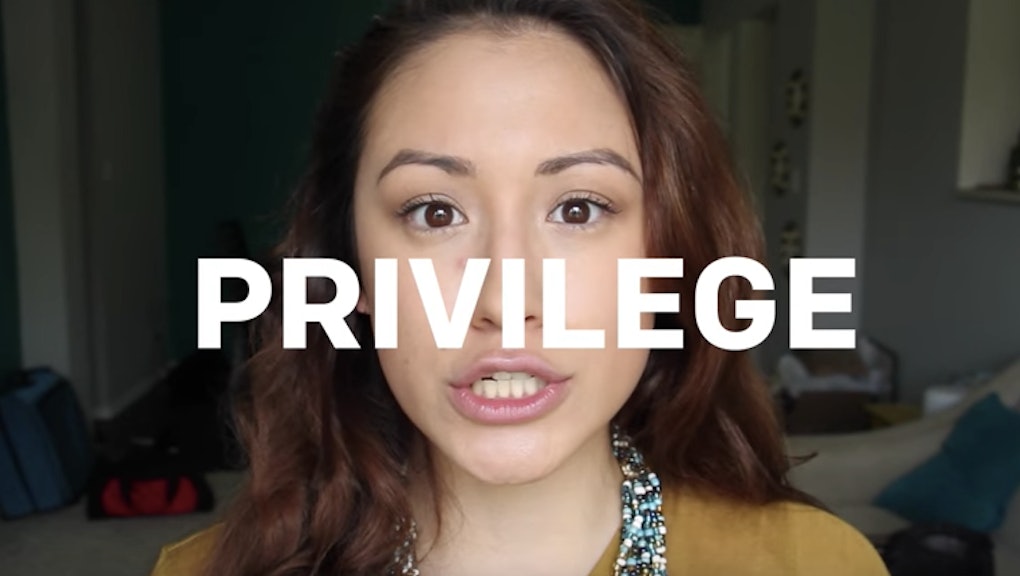 5 Key Reasons Latinos Need to Check Their Privilege, All in One Amazing Video

It's often tough to talk about privilege. People of color owning up to unearned advantages often aren't conditioned to do so. But in a new episode of TheeKatsMeow, video blogger Kat Lazo explained why it's more important than ever for Latinx — the gender-neutral term for "Latino" — to confront their own privileges.

"As a Latina, I know that we're marginalized by the media, and by public policies and by society," Lazo helpfully explains in the video. "But we're not all marginalized in the same way or even to the same degree."

"I'm a U.S. citizen, therefore I've never had to actually fear being deported or being separated from my family," Lazo says. That's a fear that many undocumented immigrants do have to live with. There are roughly 11 million undocumented immigrants in the United States, roughly half of whom were born in Mexico, according to Pew Research. Despite announcing key executive actions meant to stem the tide of deportations, especially among young people, Barack Obama has been routinely criticized for deporting more immigrants than any other president.

"I've never had to think ahead of time about how I'm going to navigate certain spaces," Lazo says about being able-bodied. Nearly one in five people in America lives with a disability, according to the Census. That includes so-called "invisible disabilities," such as living with depression or another mental illness, or having physical disabilities.

People living with disabilities have a higher likelihood of experiencing persistent poverty, according to researchers, and more than 9 million adults reported having difficulty with at least one activity of daily living, like bathing, dressing or eating. That's all led to loud calls to retire forms of "ableism," like failing to provide wheelchair ramps in public spaces.

"Although my parents are immigrants and they sure as hell did not grow up middle class," Lazo says, "I did." She went to schools with more money and more resources. Researchers have long studied the impact of a family's income on its children's educational opportunities. "Income has become a much stronger predictor of how well kids do in school," Stanford sociologist Sean Reardon told the Atlantic in 2013.

Sure, women are absolutely marginalized in society. But "I identify with the gender I was assigned to at birth," Lazo says. That experience, which is called being cisgender, has become front-page news in recent weeks as North Carolina's HB2 has highlighted the unique challenges transgender people face every day, like trying to use public bathrooms. While conservatives have argued that cisgender people risk assault if trans people are allowed to use public bathrooms that align with their gender, there have been exactly zero reported instances of that actually happening.

Although Lazo identifies as Latina, she points out that, "Latina isn't a race, it's an ethnicity." In other words, Latinx's can be any race — black, white, indigenous. And those identities have profound social and political consequences.

For instance, Afro-Latinos have long sought recognition on the U.S. Census. Pedro Noguera, a leading education scholar, told NBC News that Afro-Latinos are fighting for institutional recognition because their race matters.

"It tends to be that darker Latinos are less likely to get the better jobs, the best positions," Noguera told NBC News. "The only profession where Afro-Latinos are really visible is athletics, like boxing and baseball." As Lazo points out, Latinx who identify as white make up to $5,000 more than those who identify as black.

"I wanted to make this video because I think that many of us Latinx often forget to check our own privilege," Lazo says before detailing her own experience growing up in a predominantly white middle class neighborhood and grappling with her own identity. The video is definitely worth watching in its entirety. Check it out here: