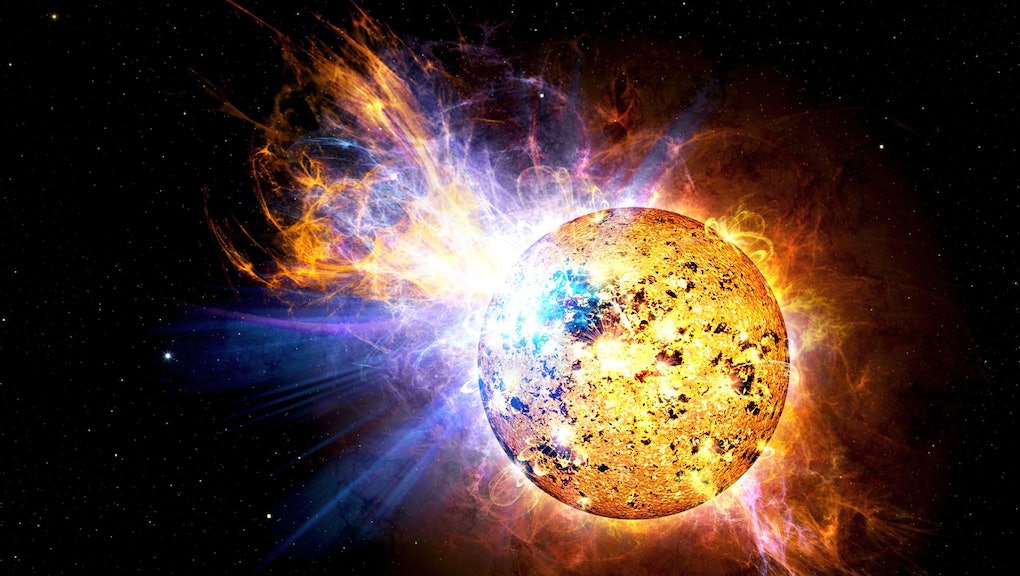 A Superflare Could Stop a Mission to Mars in Its Tracks

Occasionally, our sun will erupt in a terrifying burst of plasma and high-energy particles called a "superflare." Astronomers estimate superflares don't happen more than once every 1,000 years, but if one ever hit astronauts traveling through space, they could potentially get a lethal dose of radiation, according to research published in the journal Acta Astronautica.

Solar eruptions are powerful enough to knock out satellites and communication systems on Earth, but life on our planet is mostly protected by its magnetic field, which shelters us from radiation.

Scientists think the last known superflare hit Earth in the year 775, and the planet remained relatively unscathed. We only know it happened because of geological records in tree rings and ice cores. But if a superflare of that magnitude hit astronauts in space, they'd get fried.

"An event of this magnitude would likely be catastrophic if it were to occur during a transit in deep space, such as to Mars, unless substantial shielding is provided," lead author Lawrence Townsend told Space.com.

Right now, astronauts have radiation-exposure limits. If they get dosed with too much radiation in space, they're not allowed in space again. Obviously, a superflare would greatly exceed the limits. That powerful of a dose of radiation could cause cancer, radiation syndrome or even death.

"The calculated organ doses and effective doses are found to substantially exceed the recently recommended exposure limits in nearly all cases," the researchers write. "Acute radiation syndrome responses are possible, including emesis, diarrhea, hemorrhaging, epilation and possible death of the crew."

And anyone wanting to live and work on Mars in the future will face a similar problem. The magnetic field around Mars is almost nonexistent, so Martians would need some kind of underground fallout shelter to protect themselves should a powerful flare ever head their way, the researchers suggest.

The takeaway message of the research seems to be that we need to figure out a way to protect astronauts from space radiation if we hope to keep exploring our universe.