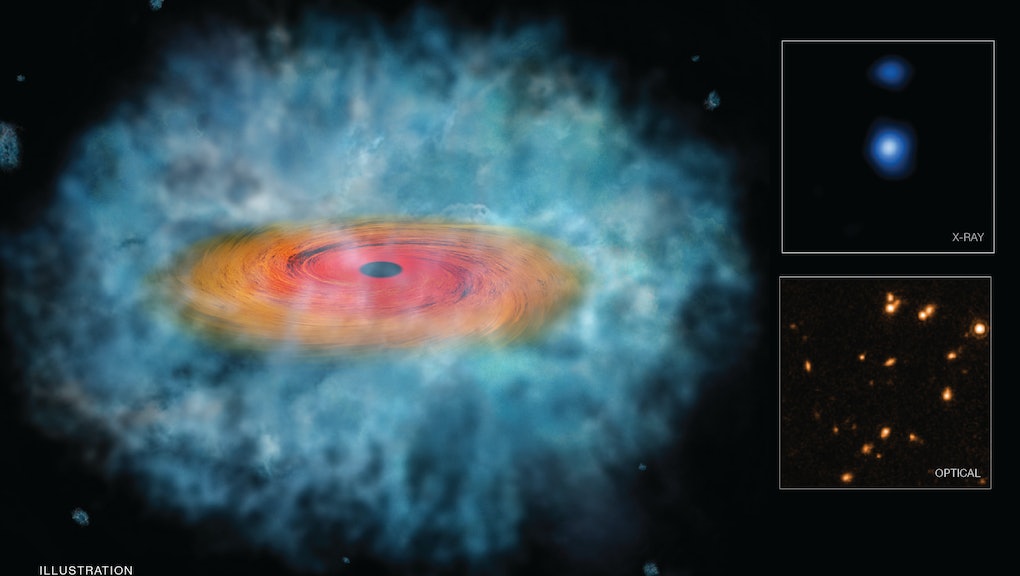 Astronomers may have finally figured out how supermassive black holes form: They start growing from a really big "seed."

Supermassive black holes are essentially superdense, bottomless pits from which nothing can escape. They can grow up to billions of times the mass of the sun, and you can find them at the center of large galaxies. Our own Milky Way galaxy has a supermassive black hole named Sagittarius A*.

Finally, new research has taken us a step closer to figuring out how these monsters arise.

Astronomers used data from three different telescopes and 3-D modeling to figure out that supermassive black holes in the early universe formed when gas clouds collapsed into black hole seeds.

"Our discovery, if confirmed, explains how these monster black holes were born," astronomer Fabio Pacucci, lead author on the study, said in a statement from NASA. "We found evidence that supermassive black hole seeds can form directly from the collapse of a giant gas cloud, skipping any intermediate steps."

Then the seed grows into a full black hole behemoth.

Astronomers figured this out by identifying two giant "black hole seeds" that formed 1 billion years after the Big Bang.

Each is about 100,000 times the mass of the sun. They likely formed after a really big gas cloud collapsed.

Previously, many astronomers thought a cataclysmic event like a star collapse would have to trigger a supermassive black hole. Some thought they might arise after a normal black hole sucks in enough extra material. Now it seems the process is much simpler.

"There is a lot of controversy over which path these black holes take," co-author Andrea Ferrara said in the NASA statement. "Our work suggests we are narrowing in on an answer, where the black holes start big and grow at the normal rate, rather than starting small and growing at a very fast rate.

It makes sense: If you want to grow something huge, you need a huge seed.