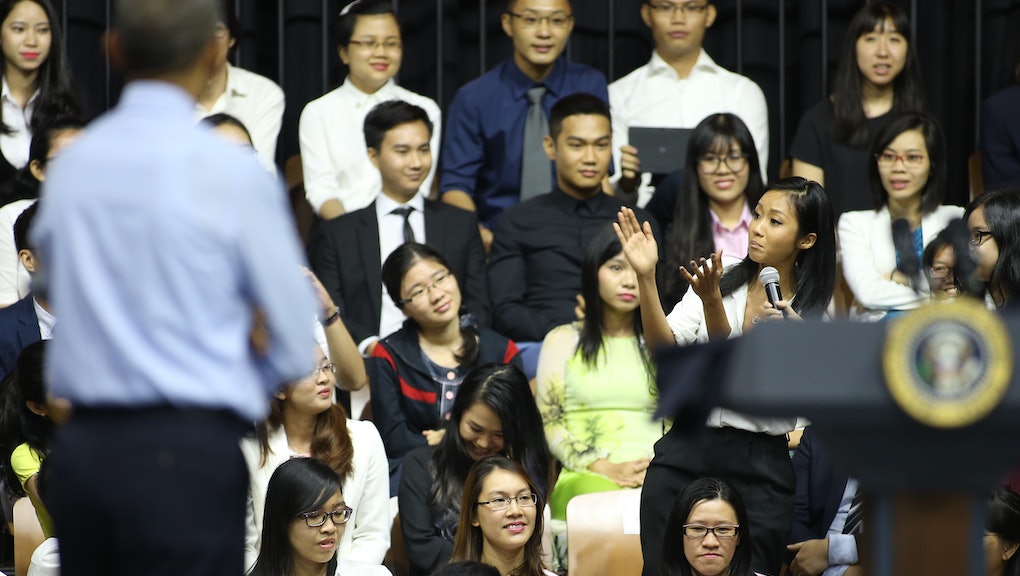 Barack Obama has long professed his love for hip-hop. He's a Jay Z fan who prefers Kendrick Lamar to Drake and quotes Swizz Beatz's discography at official White House functions. And, it turns out, he's also a fan of overseas emcees like Suboi, a young Vietnamese rapper who turned out at a recent town hall on free speech with the president.

Obama was in Vietnam to tout his administration's end to a decades-long arms embargo against the country. He used the town hall to promote his message that the Vietnamese government should encourage free speech among its citizens.

That's when Suboi, a young female emcee who raps in both Vietnamese and English, started to ask a question about gender in hip-hop. But before she did, the president encouraged her to bust it. "Before I answer your question, why don't you give me a little rap — let's see what you got," the president said. "Come on. Do you need like a little beat?" the president added before dropping a beat of his own:

Suboi wound up rapping in Vietnamese:

Afterward, she summed up what she was rapping about in English: "I was just talking about some people having a lot of money, having big houses," she said. "But actually, are they really happy?" As the Washington Post recounted, she went on to talk about the impact of stereotypes about women in hip-hop, saying that people see her as "an Asian rapper ... the cute girl."

The president responded by praising the free speech that made it possible for hip-hop to emerge among black and Latino youth in the South Bronx, and fueled its rise as a global phenomenon. "That connection that we've seen now in hip-hop culture around the world wouldn't exist," he said. "So you've got to let people express themselves. That's part of what a modern 21st-century culture is all about."