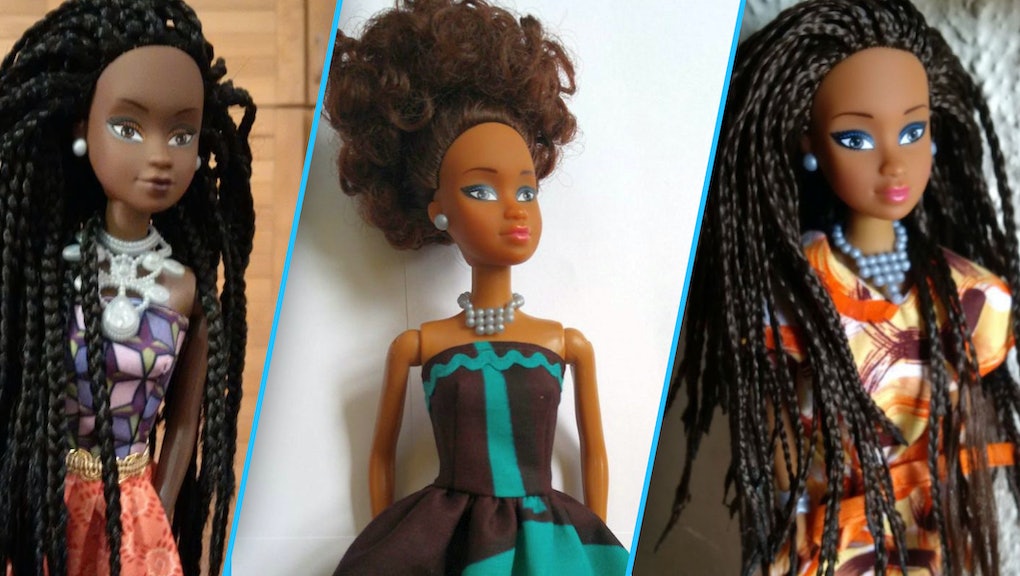 To the left blonde, blue-eyed Barbie. There's a new girl on the block, err, aisle, and she's got thick, natural hair, a brown complexion and is dressed in traditional African garbs.

In 2014, it was reported that entrepreneur Taofick Okoya sold 6,000 to 9,000 of his Queens of Africa and Naija Princesses dolls a month, and now these natural-haired diverse dolls are finally making their way over to the United States as part of a multi-city wide tour.

The Nigeria-based company, which originally launched in 2007, was inspired by Okoya's 3-year-old daughter. "I was just getting accustomed to the reality of being a dad, and I had vowed to be the greatest dad to my children," he said in an email. "So when I realized my daughter had an identity crisis at the age of 3 when she asked me 'What color am I?' I felt where did that come from, what did I do wrong?"

He quickly realized that toys had a much greater impact on children than merely being an object to play with.

To remedy this, he created Azeezah, Nneka and Wuraola, each of which are available in natural or braided hairstyles, and dressed in traditional African garbs with alternative outfit options on its website. Each doll is meant to represent different ethnic groups (Hausa, Yoruba and Igbo) within Nigeria.

"We remain cognizant of the fact that, with at least 3,000 distinct ethnic groups and about 2,000 languages, Africa is the continent with some of the most genetically and culturally diverse people on Earth," he said. "We therefore use every opportunity to provide the child — and in some cases their parents — with insights into their culture and heritage."

Bringing the dolls to the United States was a logical step, as there is a large population of people of African decent. "We are taking action so the coming generation of African girls all over the world can enjoy, and celebrate the uniqueness of being African," he said.

Okoya is just one of many entrepreneurs creating their own diverse dolls and addressing a toy industry that once was inundated by fair-skinned, blonde Barbies. In 2015, one mom launched a Kickstarter for a doll with natural hair after her daughter said she wanted "yellow hair and white skin like her dolls." Later that year, South Africa-based company Momppy Mpoppy created ones with natural hair and trendy clothing.

Earlier this year, we were introduced to Malaville dolls, which are also produced in multiple skin tones with textured, curly hair, and dressed in African and Caribbean outfits. Just a few months ago, My Muse Dolls introduced a customizable feature that allowed children to choose between natural hair choice and skin tones. And who could forget Brandy Barbie, based off of the "Top of the World" singer, which featured a variety of hairstyles from an afro to bantu knots to braids.

But it's not just skin or hair diversity that companies are starting to address, there are also dolls being produced in multiple sizes to provide more options for children than just the skinny Barbies that were once the only thing available. In January, Barbie unveiled its Fashionistas line complete with three new body types: petite, curvy and tall. It's not just female dolls either: Doll makers at Lammily launched a realistically proportioned male doll to go with the female version the company also sells.

With the ever present diversity conversation growing in numerous industries from fashion and beauty to film and television, these dolls are essential in teaching young girls and boys that there is more than one idea of beauty.

"Our overriding aim has been to empower [girls] with self-pride, so much so that she has one less issue to worry about, and instead has the freedom to focus on her other attributes, and use these to better her world and impact the world for others," Okoya said.