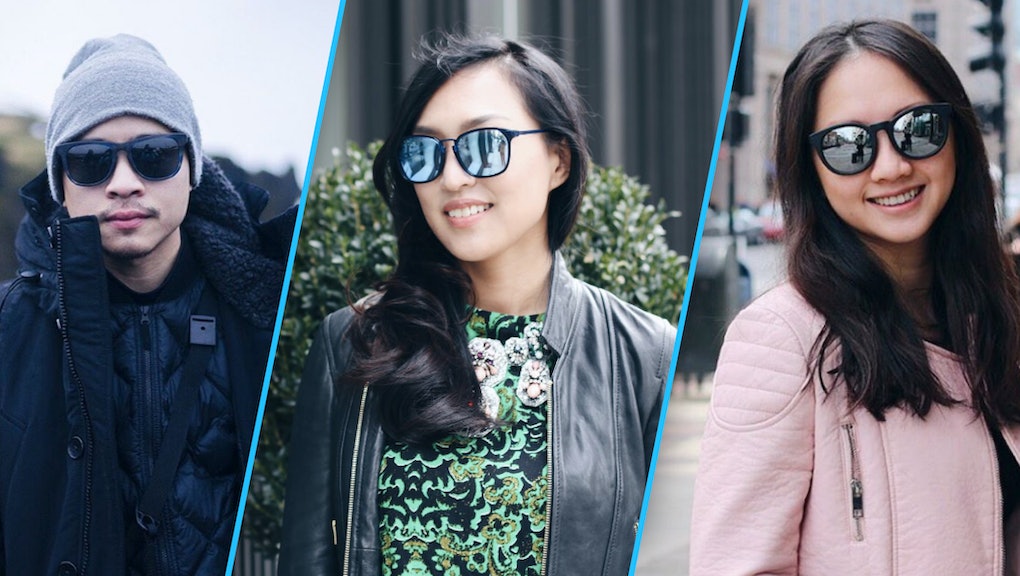 Fashion blogger Victoria Hui is frequently photographed in all different pairs of shades on her website TheLustListt. But little do her 30,000 Instagram followers know that her face shape has caused her to have a tough time hunting down ones that work for her — or "Asian fit" versions, as they're often called.

"A low nose bridge and high cheekbones make it difficult to find glasses that sit on the face properly," Hui explained in an interview. "I find that frames always hit my cheeks before they have the opportunity to settle onto my nose bridge."

Emily Men, one of the lifestyle bloggers behind The Wardrobes, had similar issues to Hui's, and has often had to hack the pairs she's owned.

"It's hard because although we do have selections, we are still missing out on so many cute styles that simply just don't work on our face because of our nose bridge," she said in an email. "If we do see a style we like that doesn't work, you are able to add in nose pads, but that gets expensive, and some won't work with nose pads even if they are added in."

Many caught wind of the term "Asian fit" back in 2013, when popular eyewear brand Oakley got into hot water for using the term in their product names. At the time, Mic called the name stupid and suggested it was simply a marketing tactic. That most sunglasses frames sold in America are designed to be "one shape fits all" played a large role in the term's making waves — but is also testament to why such a specification was necessary.

As evidenced by the need for Oakley's line, Hui and Men are hardly the only people of Asian descent that have faced difficulty when looking for the perfect pair of glasses. Back in 2004, comedian Margaret Cho penned an essay on her website about this very subject asking why she, an Asian-American woman, wasn't able to find glasses that were both functional and fit her face without sliding down.

One might assume in the 12 years since writing that essay, things would've changed with fashion brands like Uniqlo and the popular K-beauty trend overtaking the market. Still — paralleling a recent outcry about the lack of Asian actors in film — quality glasses remain elusive.

Although times may not have changed just yet, there is a glimmer of hope, as some brands have taken the issue into their own hands and designed frames for diverse facial profiles. Take for instance Covry Sunwear, a brand which originally launched on Kickstarter in July 2015 featuring sunglasses with a frame that sits higher on the nose and away from the cheeks.

"Shopping for sunglass was always a frustrating ordeal," Athina Wang, one of Covry's founders, explained in an email. "I would go to the sunglass store with hopes of buying the latest trending styles, but often left disappointed and empty handed."

She often settled for pairs that left marks on her cheek, slid down her nose or rode up her face when she smiled. Because after all, it was either that or wear no sunglasses at all. Her cofounder, Florence Shin, faced similar issues.

"I envisioned myself delighted to try on new shapes and styles because what girl doesn't love shopping, but the reality was that they never fit comfortably," she said. "Most sunglasses in the U.S. market don't complement lower nose bridges, leaving very few, if any, options for comfortable-fitting frames."

The duo hoped not only to increase the amount of available glasses but also to raise awareness about the issue that cause the brand to be born. "We often hear that many people don't know this is an issue," they said. "Many of our customers wear sunglasses that fit poorly, but they think that's how all sunglasses fit."

Another brand joining Covry in the fight for diverse eyewear, Gentle Monster, which was founded by Hankook Kim in South Korea five years ago, recently opened its North American flagship store in New York City.

According to Fashionista, this company creates unisex glasses made of titanium steel, stainless steel or cellulose acetate. The latter is what can be adjusted to match different facial structures — which is something that most glasses cannot do, making this one of the only companies make eyeglasses and sunglasses for all faces.

"The brand is growing globally, [so] it was very important for us to cater the glasses to every type of face, while still offering our Asian fit," Taye Yun, the brand's vice president of communication, said in an email.

But, as it turns out, there are also more well-known brands making these products — you just have to know where to look. Eyewear Envy, an online retailer launched in 2011, is a hub for those that might've had difficulty hunting.

Founded by Dr. Katherine Manalo, it locates and sells "Asian fit" glasses — or ones that the company realized could work for an assortment of faces, regardless if they are labeled as such — from numerous American and Asian manufacturers (like Ray-ban and Coach).

So why exactly aren't big corporations producing "Asian fit" specs? Luxottica, one of the largest eyewear manufacturers in the world that is home to brands such as Dolce & Gabbana and Chanel, said in 2015 it has to do with a lack of awareness but that its goal is "to have collections that are 100-percent suitable for Asian consumers."

With this and the the fact that "the U.S. eyewear market continued to see healthy growth in 2015," as Euromonitor explained, it's possible that there will be more inclusive companies creating options for all people — yes, including Asians.

While glasses might seem like a trivial accessory, it purely becomes an annoyance when the tool you need to function is constantly is falling off of you face or digging into your skin.

Cho said it best: "Give me my fucking glasses... We want to see."