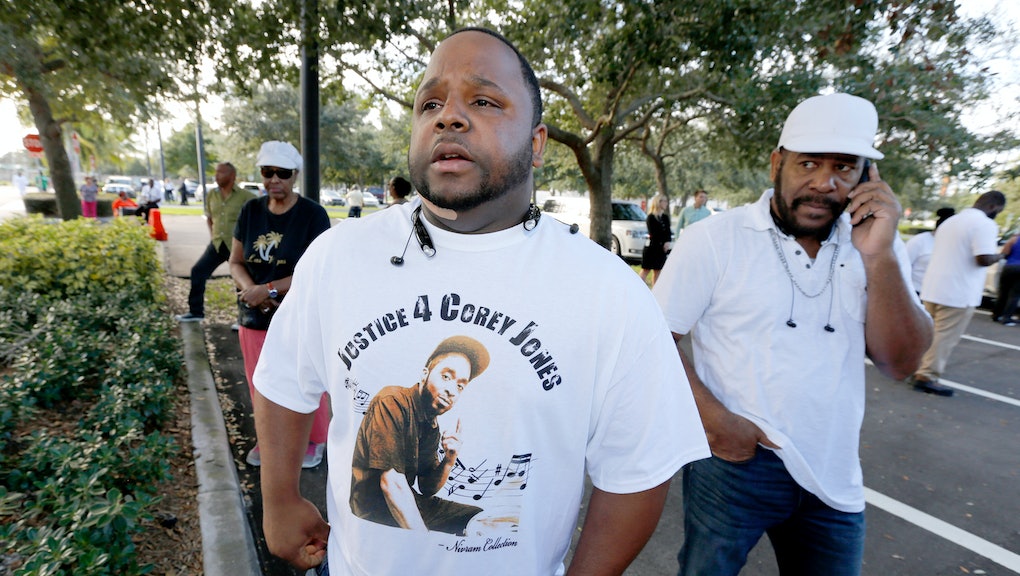 The family of a young black man gunned down by a plainclothes police officer in Florida last year expressed relief this week at the news of criminal charges in the case. Nouman Raja, the now-former Palm Beach Gardens police officer, was charged Wednesday with attempted first degree murder and manslaughter by culpable negligence in the death of popular church drummer Corey Jones, according to a CNN report.

In a statement, the Jones family welcomed the development in the case, according to CNN: "While we understand that nothing can bring back our son, brother and friend, this arrest sends a message that this conduct will not be tolerated from members of law enforcement."

A grand jury determined "that the use of force by Mr. Raja was unjustified" in the Oct. 18 shooting, said Dave Aronberg, the state's attorney in Palm Beach County, Florida, according to CNN. Raja, who is Indian-American, was fired from the police force last November. He was arrested Wednesday on the charges and appeared before a Florida judge Thursday morning, the Palm Beach Post reported. His bond has been set at $250,000.

Jones, 31, had been stranded in his SUV on the off-ramp of a South Florida interstate when he encountered Raja, 38, who had been on burglary detail in plainclothes and drove an unmarked police car. The officer told authorities that he approached Jones' vehicle thinking it was an abandoned car, but discovered the motorist there and claimed that Jones pointed a gun at him.

Investigators determined that, although Jones did have a concealed weapon in his vehicle when he encountered Raja, the gun was discovered 41 yards from his body with the safety lock on and no shots fired. Recordings of Jones' call to a roadside assistance hotline and Raja's 911 call to report the shooting revealed inconsistencies in the officer's version of events, and that Raja did not identify himself as an officer to Jones before firing at him six times, according to CNN.

Wednesday's announcement of the charges against Raja came on the same day federal authorities in Minneapolis declined to charge the officers who shot Jamar Clark, an unarmed black man, in November. Clark's and Jones' cases joined the list of names of racial minorities killed by officers in 2015, driving a national policing reform effort started by activists in the Black Lives Matter movement.

Jones had been described by friends and family as friendly and churchgoing. Jones was also known as the talented drummer at the Bible Church of God in Boynton Beach, Florida, where his grandfather is the longtime pastor.

Prior to his encounter with Jones, Raja had been disciplined in his last police job for failing to turn in prescription drugs that he confiscated from a suspect in 2013. Raja joined the Palm Beach Gardens Police Department in April 2014 from the Atlantis Police Department after commanders there found he was consistently "derelict in the performance of his duties," according to the disciplinary file released last year by Atlantis Police Chief Robert Mangold.

Authorities have not alleged that Raja shot Jones because of a bias against African-Americans. The Jones family has also avoided this narrative.

Family hesitated to make the case about Jones' race

Last fall, Jones' shooting death drew some attention from activists in the Black Lives Matter movement. Early on, Jones' family was represented by Benjamin Crump, the lawyer and president of the National Bar Association who rose to prominence for representing Trayvon Martin's family in 2012. Martin was the black teenager shot in a Sanford, Florida, gated community by George Zimmerman, a member of the neighborhood watch who was later acquitted of murder and manslaughter charges. Veteran civil rights activist Rev. Al Sharpton also vowed to get involved in the Jones case, if the family requested it.

But members of the Jones family urged supporters last year to stay calm and avoid protests like the ones seen after the deaths of Michael Brown in Ferguson, Missouri, and Freddie Gray in Baltimore.

"This is not a black thing," Clinton Jones, Jr., Corey Jones' older brother, said in a press conference in October. "No disrespect to Black Lives Matter, but all lives matter."