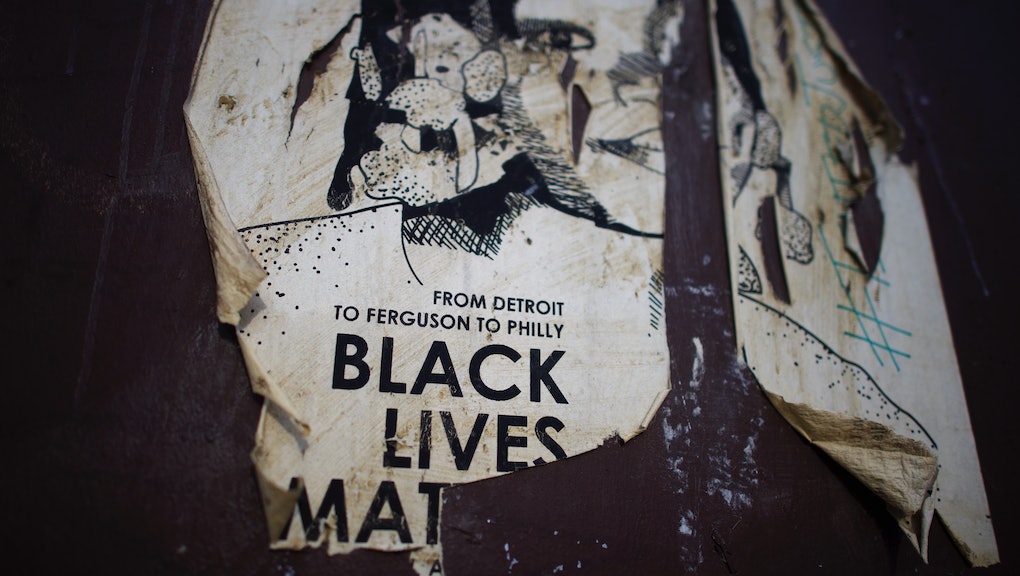 Jasmine Richards, an organizer with Black Lives Matter, was found guilty Wednesday by a Pasadena, California, jury of attempted lynching, a felony under California law. Her attorney says she was tried by a jury on which no black people served.

Richards' conviction stems from an incident Aug. 29 when she led a peace march at a Pasadena park to bring attention to the 2012 police killing of Kendrec McDade. An unrelated altercation involving a black, female patron at a nearby restaurant caught protesters' attention, including Richards'. When police tried to arrest the woman, protesters surrounded her and tried to take her out of police custody.

Police and prosecutors contend that the altercation between Richards and law enforcement morphed into a riot, and that Richards' attempts to keep the woman out of police custody during the melée constituted an attempted lynching. California's anti-lynching law was enacted in 1933 amid a spate of anti-lynching legislation across the country. California's Penal Code 405a defines lynching as "the taking by means of a riot of any person from the lawful custody of any peace officer."

But as Richards' case shows, prosecutors in the state have begun using the law to prosecute protesters.

Richards is the founder of the Black Lives Matter Pasadena chapter, pictured below in an undated photograph:

In the below video, Richards pleads for help in her case, and describes her activism:

Richards is imprisoned at Lynwood County Jail awaiting sentencing, which is scheduled for Tuesday. She faces up to four years in state prison. While she awaits sentencing, black activists across the country have expressed shock and disbelief at law enforcement's use of the law, meant to curb racial violence against blacks, being used against black citizens.

Richards is the second black female protester to be charged with felony attempted lynching in California in 2016, though she is the first one to be convicted. In April, 20-year-old Maile Hampton was charged in Sacramento with attempted felony lynching when she tried to intervene in the police arrests of activists during a protest near the state Capitol. Those charges were later dropped.

Richards' charges were not. In a statement, Black Lives Matter denounced her conviction. "The perverse nature of this case is stark both because of the law's tragic name but more importantly because police, who have long exercised poor and deadly judgment in cases impacting Black communities, cannot be trusted to make lawful arrests or to guarantee arrestees will make it home alive," the group wrote. "Given that, removing a black person from police custody can be a life-saving action."

Protesters are also calling on people to "pack the court" with supporters for Richards' sentencing Tuesday.

"As far as I'm concerned, the only person who's being lynched is Jasmine," Gyamfi said. "For the purposes of punishing her and letting her serve as an example to other [black people] who talk back in Pasadena."

A brutal history: Lynching has a long history in the United States. In the years following the Civil War, black men and women who were accused of crimes (often falsely) were kidnapped from their homes, courthouses or jails by so-called "lynch mobs," crowds of angry whites who rioted in favor of vigilante justice. Some were hanged from trees or lampposts; others were burned alive or mutilated and tortured to death.

For decades after the Civil War, lynching was used as an act of racial terrorism against African-Americans. Between 1877 and 1950, nearly 4,000 people, most of whom were black, were lynched in the United States.

"Lynching and the terror era shaped the geography, politics, economics and social characteristics of being black in America during the 20th century," Bryan Stevenson, founder and executive director of the Alabama-based legal clinic Equal Justice Initiative, told the New York Times.

EJI compiled a detailed report on the impact of lynching during the post-Reconstruction era leading up the civil rights movement. "Lynching reinforced a legacy of racial inequality that has never been adequately addressed in America," researchers wrote in the report. "The administration of criminal justice especially is tangled with the history of lynching in profound ways that continue to contaminate the integrity and fairness of the justice system."

Thanks largely to a decadeslong campaign waged by the NAACP, the country's first anti-lynching law was passed in 1922 to help curb the violence. But in more recent decades, law enforcement has used a specific interpretation of the law to crack down on left-wing activists. In detailing Hampton's case last year for the Guardian, Anita Chabria described how the law was used against anti-fur protesters in San Francisco in 1999, Occupy Oakland protesters in 2011 and immigration advocates in 2014.

The Pasadena prosecutor's office did not respond to requests for comment on Richards' case.

Gyamfi argues the conviction was based on a misguided interpretation of the law as it presently stands. "There's not a single [instance] of disturbing the peace by force or violence," she said. "All you have is black bodies and you have black bodies that are challenging the police."