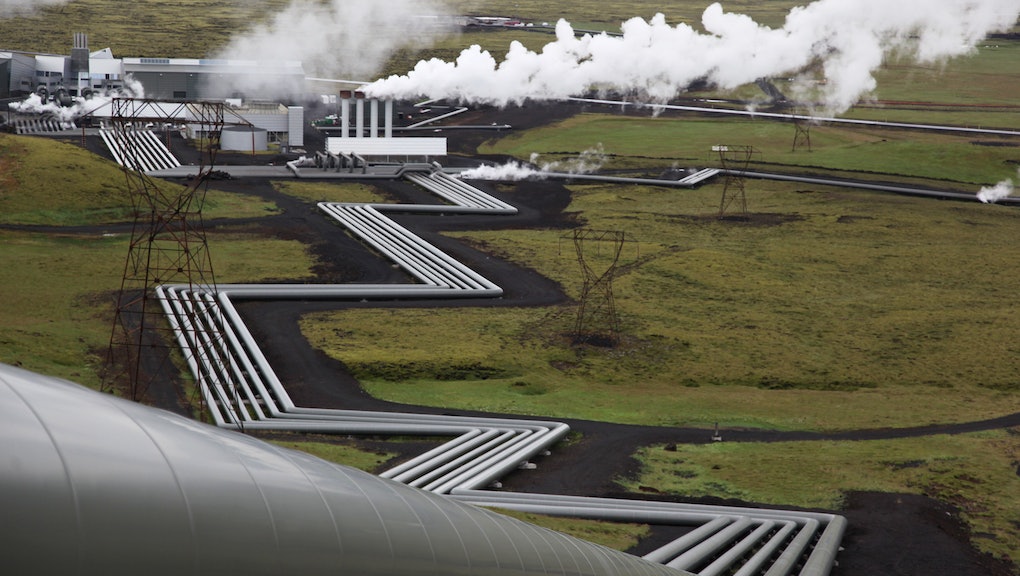 Scientists Found a Way to Turn Carbon Dioxide Into Minerals

We're running out of time to solve our carbon dioxide emission problem.

Countries are transitioning from fossil fuels into renewable energy, but it's a slow process. We're still emitting tons of carbon dioxide, and we need a way to reduce that as soon as possible. Now a team of researchers in Iceland may have a found a new way to help us do that.

The researchers spent two years collecting carbon dioxide and pumping it underground into Iceland's basalt rock. According to a blog post on the Conversation, almost all of that carbon dioxide has transformed into carbonate minerals.

We've already figured out a way to capture and store carbon dioxide underground. A process called carbon sequestration takes carbon dioxide emissions from power plants and pumps them deep underground into airtight pockets where they have a slim chance of escaping.

But this method won't work everywhere. Places like Iceland experience regular earthquakes that break up rock. That means carbon could easily leak out of underground pockets when an earthquake happens.

Iceland has something else going for it, though. Its crust is mostly basalt (volcanic rock), which reacts with carbon dioxide to create carbonate.

Researchers captured carbon dioxide from a geothermal power plant and pumped the emissions, along with some extra water, into an aquifer about 1,700 feet underground. At such an extreme depth and pressure, the carbon dioxide dissolved into the water and got swept away by groundwater. The researchers installed wells along the groundwater's path where they could collect samples and look for traces of carbon dioxide. After a few months, they found only small traces.

"This is the safest way to put carbon dioxide away," Stute wrote.

"Our pump in the monitoring well stopped working periodically, and when we brought it to the surface, we noticed that it was covered by white crystals," researcher Martin Stute wrote in the Conversation post. "We analyzed the crystals and found they contained some of the tracers we had added and, best of all, they turned out to be mostly carbonate minerals!"

The reaction wasn't perfect, but 95% of the carbon dioxide was successfully transformed into carbonate, according to the researchers.

"This is the safest way to put carbon dioxide away," Stute wrote. "By dissolving it in water, we already prevent carbon dioxide gas from bubbling up toward the surface through cracks in the rocks. Finally, we convert it into stone that cannot move or dissolve under natural conditions."

Basalt is a very common type of rock, so theoretically this method could be used in other places besides Iceland. First, scientists will have to demonstrate that this works on a larger scale and that it will be worth the cost.