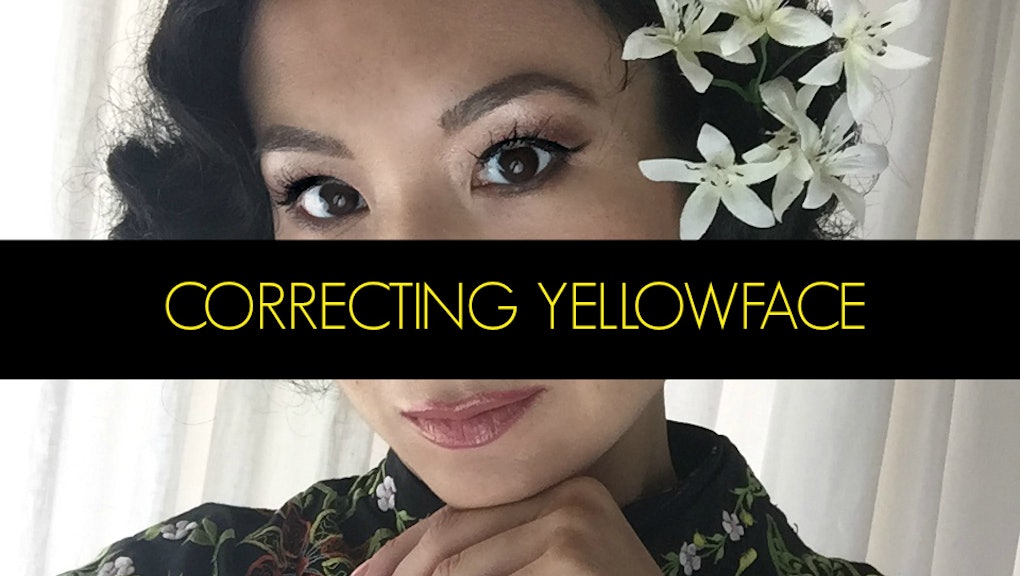 Actress Michelle Villemaire got fed up with Hollywood's yellowface problem, so she fixed it — sort of.

In this case, the term "yellowface" refers the history of white film or TV actors playing roles written for, or based on, Asian characters.

Historically, these depictions have been downright racist. White actors have played Asian characters by taping their eyelids flat and adopting exaggerated accents on screen, like Katharine Hepburn's portrayal of Jade in the 1944 film Dragon Seed.

The substance of these roles was often even more offensive. Films depicted Asian characters as evil, plotting and dangerous, even when they were played by Asian actors. Take Sessue Hayakawa's portrayal of Japanese Word War II prison-camp leader Colonel Saito in the 1957 film The Bridge on the River Kwai for example.

Even in recent months, filmmakers have made headlines for casting white actresses in Asian roles, like tapping Scarlett Johansson to play Motoko Kusanagi in the American adaptation of the Japanese film Ghost in the Shell.

Villemaire wasn't having it, so she did Hollywood a favor and corrected its mistakes by dressing as iconic whitewashed roles and getting photographed in the costumes.

"I find it hard all of the excuses that are made about nobody casting Asians," she said. "It makes it even more ridiculous."

Here's Villemaire as Luise Rainer in the 1937 film The Good Earth:

And as Hepburn in the 1944 film Dragon Seed:

And, because whitewashing Asian characters in Hollywood is still a thing, Villemaire threw in more contemporary examples.

Of course, Villemaire is far from the first Asian-American actress to speak out about Hollywood's whitewashing problem. In May, the hashtag #WhitewashedOUT brought widespread attention to the issue on social media.

Here's a handful of tweets from Asian-American entertainers and critics detailing what Hollywood whitewashing means to them:

Villemaire's project is so powerful in particular because it shows the world what's possible — if only we gave Asian actors a chance.

"I wanted to shine a light on how ridiculous it was that these women were cast in these roles," Villemaire said. "I just find it hard to believe that Asian actors were hard to find back then."