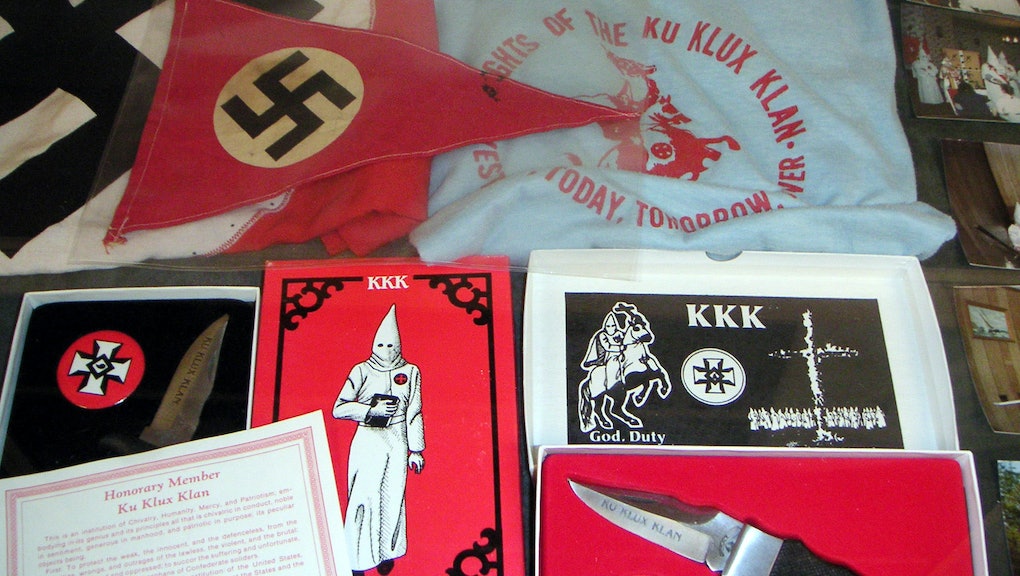 Lessons on Racism for White Students at This Detroit-Area High School — Because, Goddamn

Most Americans already know what's been hiding in the water in Flint, Michigan: dangerous levels of lead and other lethal toxins. But whatever mind-warping poisons lie in the supply 75 miles southeast in Grosse Pointe Farms — a nearly all-white Detroit suburb — remain a mystery.

Officials at Grosse Pointe South High School apologized this week after an anti-black rant from some of its students surfaced in an online video.

The footage shows students using racial slurs and advocating that black people be shipped back to Africa, segregated from whites or re-enslaved to restore white rule in the United States.

"Alright — so what are you going to do to them in 2040?" one student asks another, referring to his plans for African-Americans.

"They're going to be owned by white people and white people are going to be the dominant [sic] of the country," the other student replies. The students also talked about burning blacks at the stake, maiming the enslaved with cattle brands and trading them for booze.

Principal Moussa Hamka condemned the comments as a "deplorable" violation of the school's code of conduct, the Associated Press reported Friday.

"The majority of our students and community members do not accept and will not tolerate such bigotry," Hamka said in an email. He also indicated the students in the video could face consequences.

This is the second time in recent months Grosse Pointe officials have had to address racism among their white students. In March, the school suspended four students who posed in a photograph with the word "n*gger" scrawled on their stomachs and legs.

"It's not easy to stand up to bigotry, especially if you have people out there saying, 'You can't control people's attitudes, you can't impose your values on others,'" Greg Bowens, co-founder of the chapter, said during a March press conference.

Only 185 of Grosse Pointe South's nearly 1,700 students were black during the 2014-2015 academic year, according to the school ranking website School Digger Gary Niehaus, superintendent of Grosse Pointe schools, told local television station WJBK that four boys involved in the video have been identified.

But Grosse Pointe South shouldn't be totally singled out. In January, an Arizona high school had to address a similar photo that showed graduating seniors posing in T-shirts that spelled out the word "n*gger."

In that case, one student said she couldn't be racist because she had a black boyfriend. Oh, and the photo was meant for him as a joke, she added.

Incidents like these drove the campus protests that embattled several universities last fall, when black students and white allies sought changes in the ways administrators responded to racial discrimination and animosity.

But perhaps fewer racial incidents would pop up at places of higher learning — and high schools, at that — if educators were more proactive about racial literacy among their students.

Here are three lessons Grosse Pointe South High and other schools could use:

Descendants of American slaves can't just "go back to Africa."

The United States is only 150 years removed from the abolition of slavery, centuries after about 388,000 Africans were enslaved in North America by white European aristocrats in the North, and plantation owners in the South.

According to the Trans-Atlantic Slave Trade Database, as many as 12.5 million Africans were ripped from their native lands and shipped to the United States, the Caribbean and South America between 1525 and 1866.

Fast-forward to today, and the African continent has been carved up into many sovereign nations that would be hard-pressed to accept the descendants of American slaves as refugees. A basic but nuanced social studies course could easily lay out these points for unknowing students.

Re-segregation would likely make the United States a global pariah.

The Civil Rights Act of 1964 made it illegal to discriminate against people on the basis of race, sex, religious affiliation or national origin. But more than 50 years later, the country is still debating equal rights for minorities.

The conversation about public bathroom access for transgender people in North Carolina has provided clear evidence that the US should not pass laws enforcing re-segregation. Regardless, lawmakers in North Carolina passed House Bill 2 in March, which, among other provisions, requires transgender people to use public restrooms that match the gender listed on their birth certificates rather than gender identity.

People from across the country swiftly condemned the law. It is estimated that HB2 has now cost the state tens of millions of dollars in economic activity and business investments, according to the News Observer — a harsh referendum on how people feel about the law's not-so-latent bigotry.

Slavery still exists in the world and should be vigorously dismantled.

Slavery is still a problem, both domestically and globally. An estimated 20.9 million people remain enslaved today — often in the form of involuntarily domestic and sexual servitude for humans trafficked across national borders — according to the group End Slavery Now.

TV and film depictions of this historical phenomenon, such as the recent Roots reboot that debuted to high ratings Monday, are reminding new generations of what slaves have endured, and still endure today.

It's 2016, America. If Grosse Pointe South students aren't embarrassed by these incidents, perhaps it's their social studies teachers who should be.