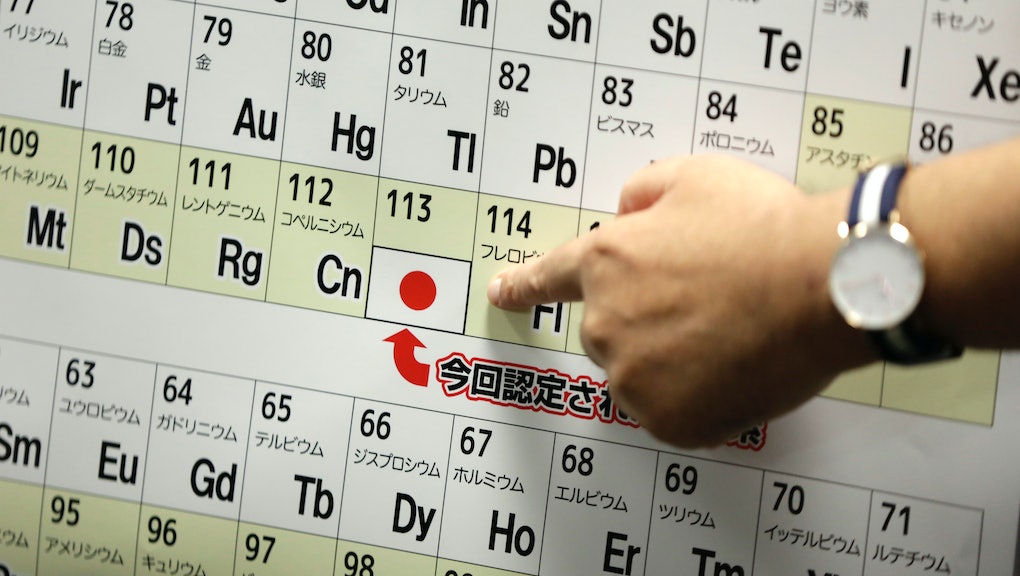 Here Are the 4 New Elements Coming to the Periodic Table

You have four new elements to memorize if you ever want to sing the entire periodic table correctly again.

The International Union of Pure and Applied Chemistry has announced names for elements 113, 115, 117 and 118. They are nihonium, moscovium, tennessine and oganesson.

IUPAC confirmed discovery of these elements at the end of last year, and then invited their discoverers to submit name proposals.

Here are the four new elements and how their names were chosen:

This element was discovered when scientists hit bismuth with zinc nuclei. It's named after the Japanese word for Japan because that's where it was discovered. If it's approved, it will be the first east Asian name to appear on the periodic table.

A team of Russian and American scientists discovered this pair back in 2010. Moscovium is named after Moscow, where the Joint Institute of Nuclear Research is, and Tennessine is named after Tennessee, where much of America's element research happens.

The same team also discovered Oganesson and named it after Russian nuclear physicist Yuri Oganessian. Oganessian is famous for his contributions to superheavy element research.

"It is a pleasure to see that specific places and names (country, state, city and scientist) related to the new elements is recognized in these four names," Jan Reedijk, who invited scientists to submit the names, said in a press release. "Although these choices may perhaps be viewed by some as slightly self-indulgent, the names are completely in accordance with IUPAC rules."

What would you name a new element?