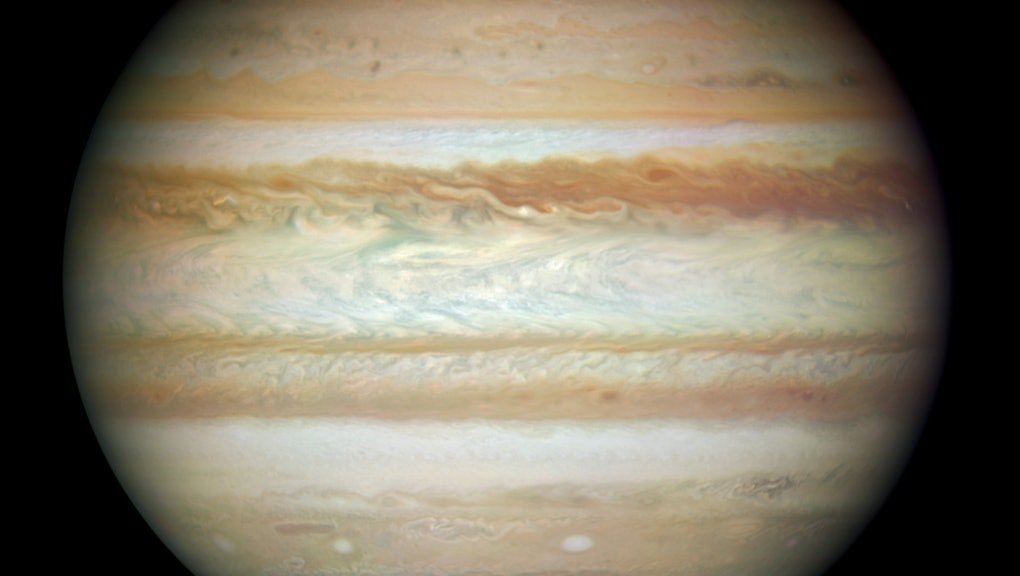 Scientists Just Gained Access to an Unexplored Part of Jupiter

For the first time ever, astronomers got a glimpse into a largely unexplored area 60 miles beneath Jupiter's clouds.

Space enthusiasts are used to seeing images of Jupiter's swirling clouds and raging storms that look like this:

Or this zoomed-in version:

But now, astronomers using the Karl G. Jansky Very Large Array in New Mexico have measured the radio emissions coming from the planet's atmosphere, according to a press release. In radio wavelengths, Jupiter's clouds appear transparent, and scientists can get a glimpse of what it looks like underneath:

"We in essence created a three-dimensional picture of ammonia gas in Jupiter's atmosphere, which reveals upward and downward motions within the turbulent atmosphere," lead author Imke de Pater said in a statement.

The map reveals that ammonia-rich gas rises from a lower level of Jupiter's atmosphere and forms the upper layer of clouds. Gas without much ammonia sinks back down to the planet. But astronomers also noticed a belt of "hotspots" full of ammonia-poor gas around the center of the planet.

Astronomers hope the research will reveal how cloud formation happens on Jupiter and other exoplanets beyond our solar system with similar conditions to Jupiter.

Only July 4, NASA's Juno spacecraft will arrive at Jupiter, so soon we'll know much more about this gas giant.