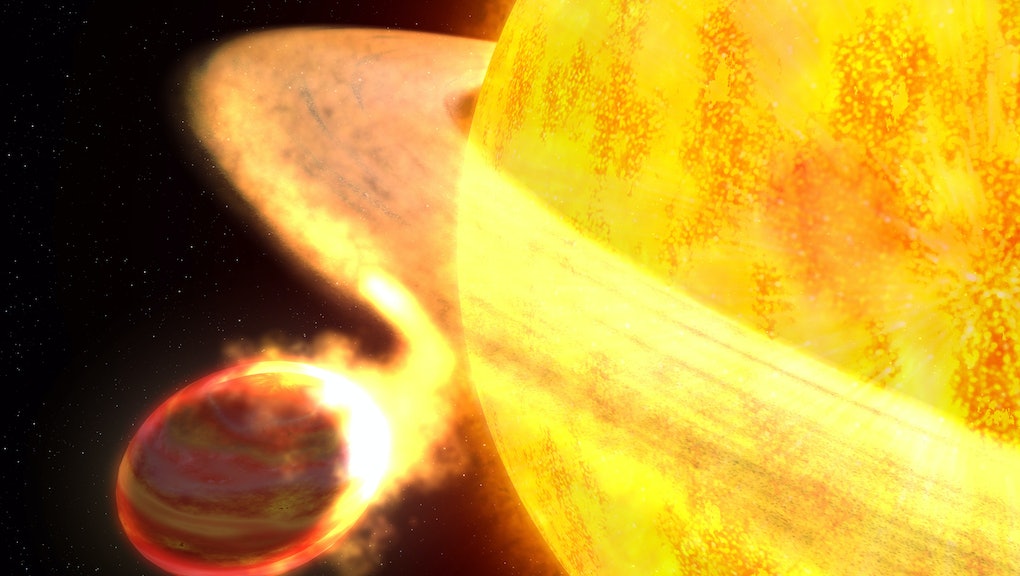 This Is What Happens When a Star Devours a Planet

Swallowing up planets might be the reason that some stars appear more reddish than others, according to new research published on the preprint server arXiv.

Researchers Emanuele Tognelli and Pier Giorgio Prada Moroni created computer simulations to model what happens when planets of various sizes get swallowed up by the outer layer of stars. They found large, iron-rich planets could actually change the chemical composition of some stars, making them appear more reddish.

"It is possible to see the footprints left by the ingestion of a planet searching for a peculiar chemical composition in the the stellar surface," Tognelli and Moroni told Mic in an email.

But whether or not we can detect these chemical traces of swallowed planets depends on how big it was in the first place and how big the star's convective envelope is. The convective envelope is a layer on the outer surface of the star where gas is continuously getting churned around, the researchers said. When a planet gets swallowed by a star, it is destroyed quickly and all its material gets mixed into the stellar convective envelope.

A thick envelope makes it hard for astronomers to find signs of ingested planets.

"The thicker is the convective envelope and the more diluted is the planet matter in the star," the researchers said.  "Consequently, the change of the stellar surface chemical composition (that we can observe) gets smaller if the star has a large convective envelope."

Do stars swallow planets all the time?

When planets first form, their orbits aren't fully stable the researchers explained. Planets in a young planet system can gravitationally influence each other, and a "kick" can send a planet spiraling into the star's surface where it gets swallows up.

It's possible that our own reddish sun swallowed a planet in the past, but its thick stellar envelope makes it hard to tell.

"Our sun could have ingested a planet in the past, but, at the moment, there is no firm indication of this," the researchers said.

The moment that a planet gets swallowed by a star probably happens really quickly, so we haven't been able to observe it in real time yet.