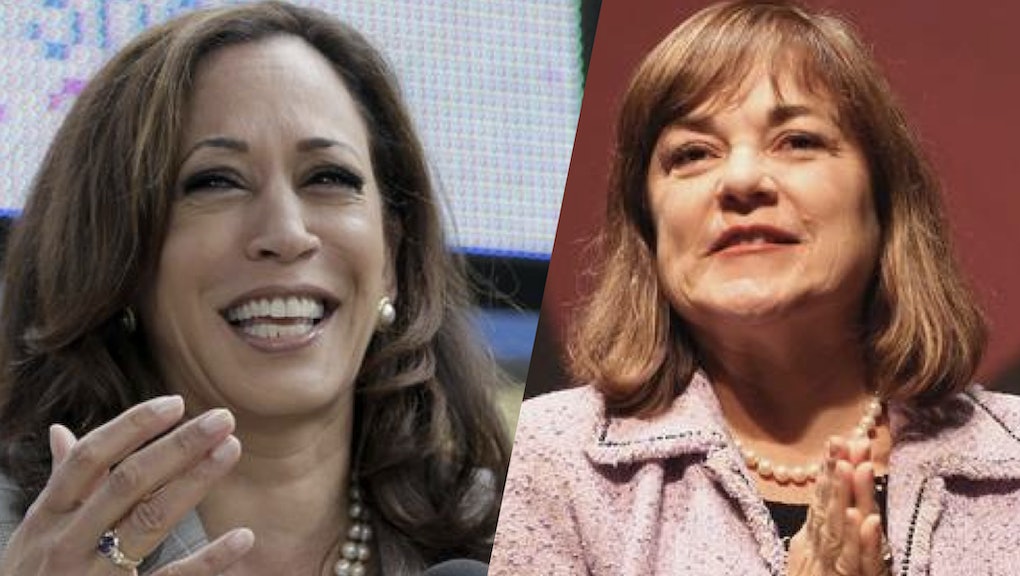 California Will Send Either a Black Woman or a Latina to the U.S. Senate in November

Hillary Clinton wasn't the only woman who made political history Tuesday.

Democrats Kamala Harris and Loretta Sanchez — both candidates for the U.S. Senate seat held by retiring Sen. Barbara Boxer — handily shut their Republican opponents out of the California primary race.

"We understand that we have so many challenges as a country and we are prepared to lead," Harris said at her victory party in San Francisco.

"We know we're going to be there [in the general election] and we're just going to start working tomorrow toward November," she told supporters.

California has never sent a black woman or a Latina to the U.S. senate. Both the state's current senators — Dianne Feinstein and Boxer, who announced she would not seek reelection in January — are white women.

When they face off in the general election in November, Harris or Sanchez could add some much needed racial and gender diversity to the federal government. Though non-white people make up more than a third of the U.S. population and women make up half, both groups are severely underrepresented in the senate.

Just 20 of America's 100 current U.S. senators are women, while six are people of color.

None of this is lost on Harris, who celebrated her victory in San Francisco Tuesday.

"Our diversity is our power," the attorney general said at her victory event.

Nevertheless, racism still makes reaching the senate an uphill battle for racial minorities. Of the more than 1,950 senators who have ever served in the institution, only nine have been black, according to NPR.

"It's that much harder for minorities to get to the Senate because they have to run statewide," Boxer, the California senator who is white, told NPR in 2013 after Sen. Booker was elected in New Jersey. Running statewide means minorities in majority-white states often must appeal to voters who may hold racial prejudices against them.

With any luck, the successes of Harris and Sanchez in California herald a sea change for electoral politics in increasingly diverse states around the country. Only time will tell.