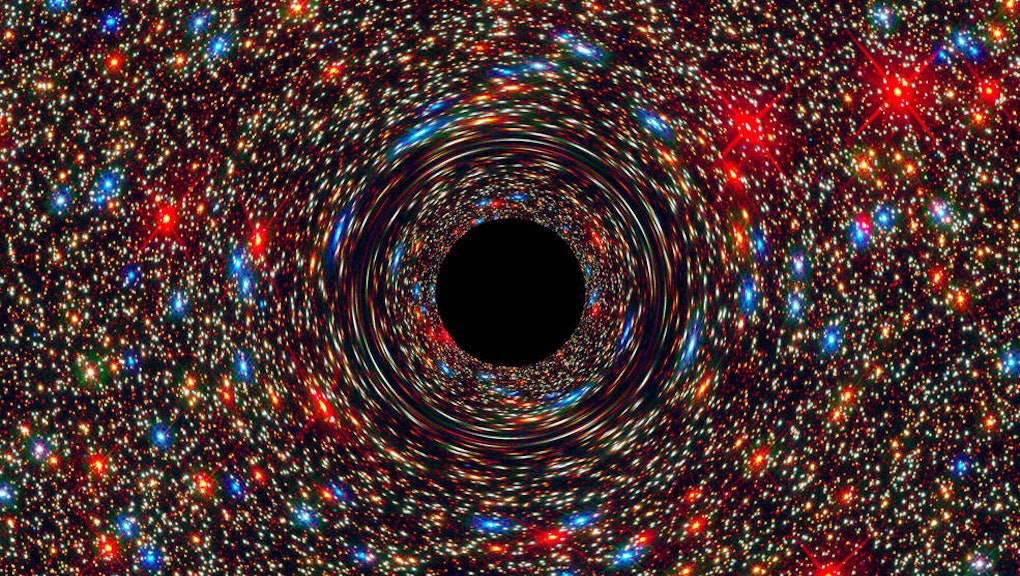 Legendary physicist Stephen Hawking just published a possible solution to one of the biggest paradoxes in physics. His theory explains how it might be possible to escape from a black hole — just like crying Matthew McConaughey in the film Interstellar.

The back story: Previously, we thought black holes just swallowed up and destroyed everything for good. If you fell into a black hole, there'd be no coming out. Then, in the 1970s, Hawking proposed that radiation can actually escape from a black hole. Basically this happens when a black hole swallows one of two entangled particles. The one that isn't swallowed escapes from the black hole in the form of radiation.

The problem is that this radiation wouldn't carry any record of information about the particle that fell into the black hole. That doesn't match up with one of the pillars of physics: Theoretically, if we were to reverse time, the universe would look the same whether it's going forward or backward. Here's Phys.org's explainer:

Quantum physics allows you to run the whole universe forwards and backwards, as long as you reverse everything in your math: charge, parity and time. Here's the important part. The big brains tell us information must live on, no matter what. Think about it like energy. You can't destroy energy, all you can do is transform it.

Thing is, that principle doesn't work if information in the universe gets erased by a black hole.

It's remained unsolved ever since.

Stephen Hawking might have an explanation. Hawking and two colleagues, Malcolm Perry and Andrew Strominger, think they're getting close to a solution. In their paper, they argue black holes might be covered with "soft hair" — a layer of zero-energy particles that record information about any objects that fall in. A pattern of all the things a black hole has ever swallowed gets imprinted on the hair.

"That pattern, like the pixels on your iPhone or the wavy grooves in a vinyl record, contains information about what has passed through the horizon and disappeared," Dennis Overbye wrote for the New York Times.

It's a big step forward, but it doesn't solve the paradox yet.

"I think that it is an interesting idea, which might be part of [the paradox] resolution," physicist Juan Maldacena said in an email to Mic.

There are a few more questions to answer and details to flesh out before we know for sure that this theory solves the paradox.

"It is important to note that this paper does not solve the black hole information problem," writes physicist Gary Horowitz in an accompanying commentary on Hawking's paper. "First, the analysis must be repeated for gravity, rather than just electromagnetic fields. The authors are currently pursuing this task, and their preliminary calculations indicate that the purely gravitational case will be similar. More importantly, the soft hair they introduce is probably not enough to capture all the information about what falls into a black hole."

Essentially, we still don't know if all the information about in-falling objects can be encoded in black hole hair. But it's a big step forward in solving the paradox.

There might be a way out of a black hole after all.