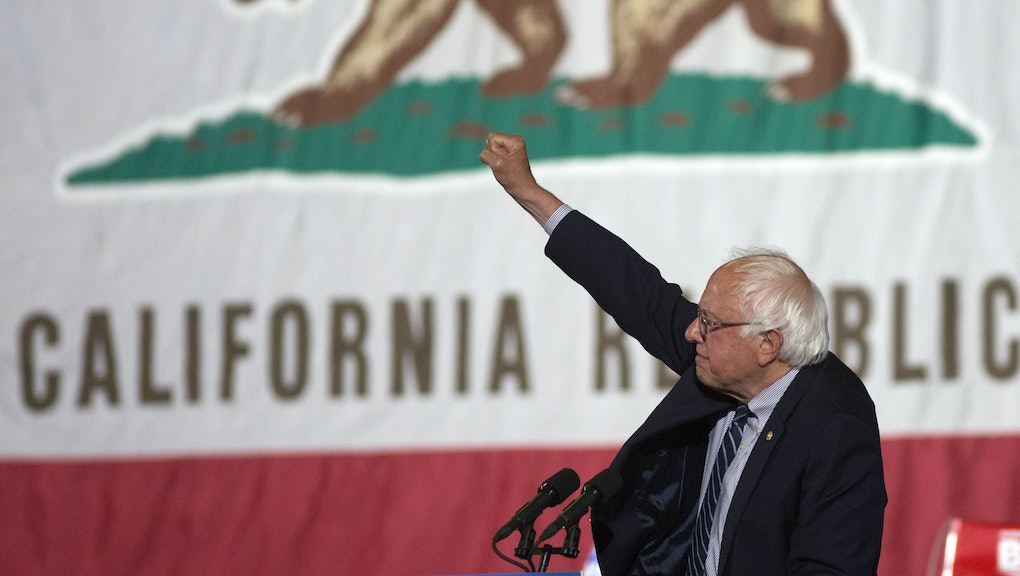 Bernie Sanders Won't Concede Defeat to Hillary Clinton. Is He Tarnishing His Legacy?

She won by every available metric — popular vote, number of states won, pledged delegates and superdelegates — a series of accomplishments that cemented her place in the history books as the first woman to be the presidential nominee of a major political party.

Yet it appears the only person who doesn't accept that truth is Sen. Bernie Sanders, whose petulant refusal to acknowledge Clinton's win could not only mar Sanders' legacy, but diminish his clout as a political leader.

"Instead of putting on a bandaid and healing open wounds, he's putting salt in them," Dave Jacobson, a California Democratic strategist, said in an interview.

While Sanders outperformed every measure set for him when the Democratic primary began last year, there's no denying he came up far short of the grand prize.

But instead of congratulating Clinton on her victory early Wednesday morning, he vowed to fight all the way until the Democratic National Convention in July — despite the almost negligible odds that waiting so long would change the outcome of his fate.

Though he's vowed never to allow Donald Trump to win the presidency, Democrats say the longer he stays in the race and sows discontent among his fervent base, the more damage he could inflict upon Clinton heading into the general election.

And possibly aiding a Trump victory in November would endanger his hopes of enacting the change he's staked his legacy on, such as free public college tuition and universal healthcare.

Also, similar to how the #NeverTrump movement lost relevancy after Donald Trump clinched the Republican nomination, Sanders risks losing leverage with each day that passes from those who he must work with to win concessions from the Democratic National Committee in adopting the policy positions he holds most dear.

"There's a five- to six-week gap between the D.C. primary and the Democratic convention," Jacobson said. "Five weeks after Trump claimed the nomination, the anti-Trump movement dissipated because they essentially became irrelevant. Does his campaign become more reflective on that the longer he waits?"

It's something even his superdelegates are admitting, publicly urging Sanders to concede and work to unite the party.

"At some point, when we're trying to flip 400 superdelegates, and it's not gaining traction, I think you have to come to the conclusion that it's not going to happen," Rep. Raul Grijalva of Arizona told the Washington Post. "You just move into a different direction. And that different direction is that we begin to try to integrate the party."

To be sure, Clinton did not concede to President Obama in 2008 on the night he was declared the presumptive nominee.

It took her four days of licking her wounds before she emerged to acknowledge defeat and wholeheartedly endorse Obama's nomination.

It's possible Sanders could be on the same trajectory.

He has a meeting Thursday at the White House with Obama, who came out Tuesday night to congratulate Clinton on securing the Democratic nomination. After the meeting, it's conceivable that Sanders decides to pack it in.

But Sanders' defiance — both Tuesday night and for the past few weeks, when it grew increasingly clear his path to the nomination had dried up — means anything is possible.

He continued to send fundraising emails after his losses Tuesday, and has a scheduled rally in Washington D.C., Thursday night.

"It's hard to imagine he comes out of a meeting with the president saying, 'I'm still running, screw him,' " said Mark Mellman, a long-time Democratic strategist. "It took Clinton four days, maybe it will take him five or six, but yes, I have to believe he's going to come around. And if he doesn't, it's really to his detriment."