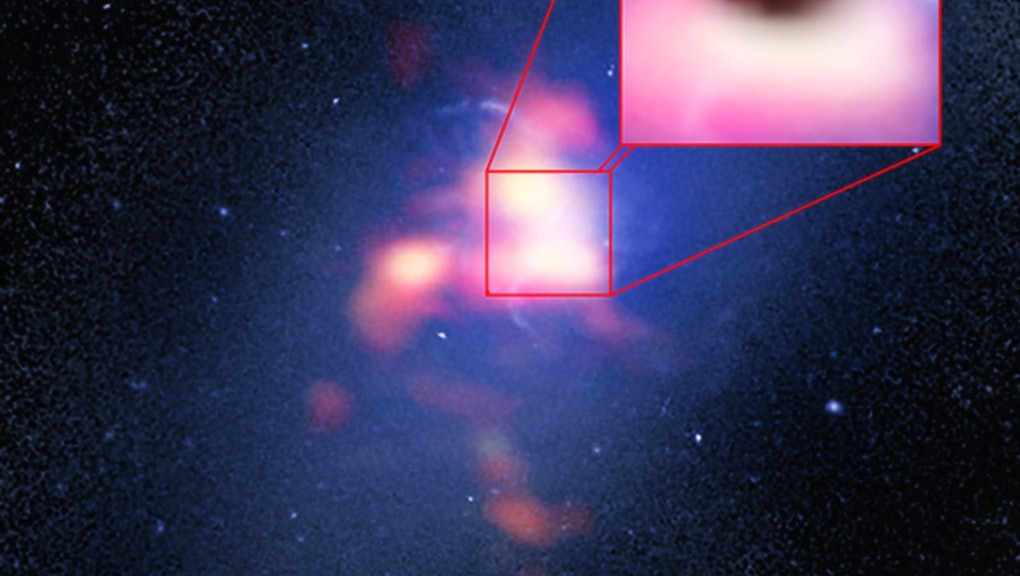 Astronomers discovered a supermassive black hole preparing to devour a clump of cold gas hurtling toward it, and it could help us figure out how huge black holes keep getting bigger.

"It was extraordinarily surprising," Yale astronomer Grant Tremblay, lead author of the study published in Nature, told Popular Science. "It's one of the more beautiful observations I've ever seen."

"Although it has been a major theoretical prediction in recent years, this is one of the first unambiguous pieces of observational evidence for a chaotic, cold 'rain' feeding a supermassive black hole," Temblay said in a statement (emphasis ours). "It's exciting to think we might actually be observing this galaxy-spanning 'rainstorm' feeding a black hole whose mass is about 300 million times that of our sun."

"It's one of the more beautiful observations I've ever seen." — Grant Tremblay

Of course, this isn't the kind of rain we're used to.

Tremblay and his team made the discovery while tracking how cold gas was moving through the Abell 2597 Cluster that sits about 1 billion light-years away from Earth.

The cluster is filled with superhot gas with temperatures at millions of degrees Fahrenheit, but some cold clumps are condensing out of the hot gas, according to the paper.

This "rain" they're reporting is essentially pockets of cold gas falling out of the superhot gas in the cluster and rushing toward the black hole at nearly 1 million kilometers per hour.

Astronomers have long predicted this kind of space weather, but this is the first time it's ever been observed.

The researchers will look for more cold "rainstorms" like this one and see if this kind of cosmic weather is common or not.