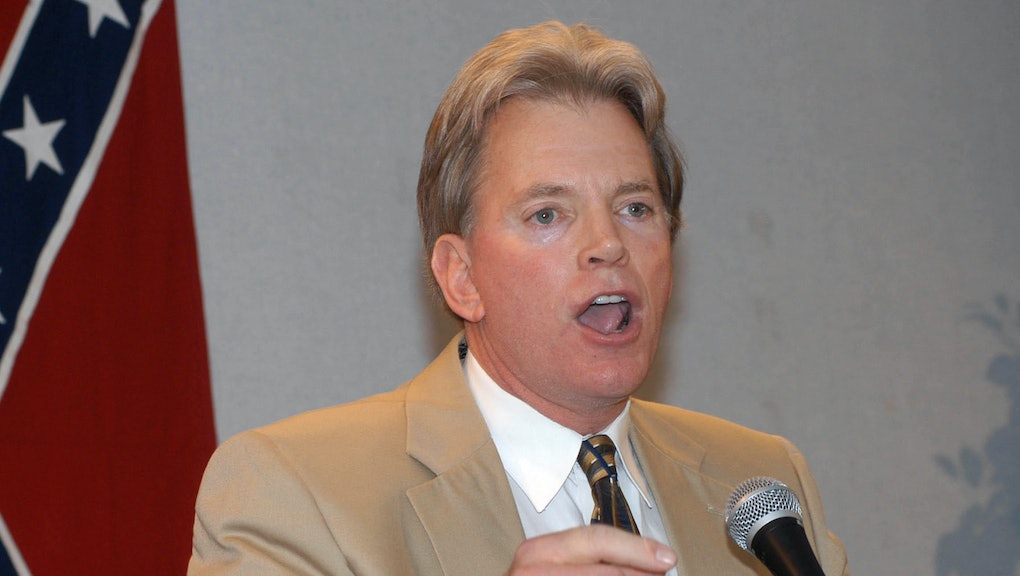 David Duke has disputed that he ever officially endorsed Donald Trump for president. But this week the reputed white supremacist is coming to the presumptive Republican presidential nominee's defense over recent remarks the candidate made about a California judge's racial identity.

Duke dismissed the controversy over Trump's accusation that U.S. District Court Judge Gonzalo Curiel's Mexican-American heritage makes him biased against him because of Trump's previous statements about Mexican immigrants. On his radio show Tuesday, Duke also blamed the intense backlash against Trump on "Jewish manipulation of the media" — a patently anti-Semitic argument.

"They're like a pack of wild dogs when they go after someone who they see as a threat to the Jewish agenda."

News media coverage of a fraud lawsuit against the billionaire real estate mogul's Trump University has been "very illustrative of the Jewish tribal nature," Duke said, according to the Iraeli newspaper Haaretz. "They're like a pack of wild dogs when they go after someone who they see as a threat to the Jewish agenda, as the neocons see Trump as a threat [and] as a non-interventionist."

Duke continued: "The viciousness of these Jews is unbelievable. I think this whole Trump University case really exploited, can really expose the entire Jewish manipulation of the American media, the American political process."

Trump's organization has been dogged by lawsuits over Trump University, a real estate training program that didn't live up to its promise, plaintiffs complained. Curiel, the federal judge in California who was born in Indiana to Mexican immigrants, recently refused to dismiss the lawsuit, even after a key witness in the case withdrew her complaints.

This angered Trump, who went on to disparage Curiel in TV appearances and at campaign rallies. "He's a Mexican," Trump said Sunday on CNN. "I'm building a wall between here and Mexico."

Fox News host Bill O'Reilly offered a flimsy defense of Trump in the face of widespread criticism that comments about the judge make the GOP presidential candidate a racist. Trump can't be a racist "unless [he is] David Duke, unless [he's] got a history of trying to denigrate minorities or other people," O'Reilly said on Wednesday's edition of The O'Reilly Factor.

Trump's penchant for disparaging racial and religious minorities has troubled the Republican Party establishment. When he launched his campaign in June 2015, Trump unveiled his plan to build an impenetrable wall at the U.S.-Mexico border as a means of keeping undocumented immigrants out. Following the Paris terror attacks and the shooting in San Bernardino, California, last fall, Trump called for a ban on Muslim travel to the U.S. over concerns about jihadist threats.

Duke is a former grand wizard of the Ku Klux Klan, a racist domestic terror group that has seen a slight resurgence in the last year. But in the last couple of decades, Duke has become reviled less for his involvement with the Klan and more for his spewing of hatred of American Jews. Hate group watchdogs such as the Anti-Defamation League and the Southern Poverty Law Center routinely go after figures like Duke, noting them as influential among racists and anti-Semites in the U.S.

The SPLC said the number of American radical right groups who would listen to figures like Duke increased 14% between 2014 and 2015 — from 784 to 892. Klan chapters, specifically, grew from 72 in 2014 to 190 last year. But they were not invigorated by Duke or Trump as much as they were by the debate over the Confederate battle flags following a hate-motivated attack in South Carolina in June 2015, Potok said.

Trump, who is not on record for harboring anti-Semitic views, appeared in March to waffle over whether to disavow support from Duke and other reputed white nationalists and white supremacists. As of Thursday, the candidate had not responded to Duke's remarks.