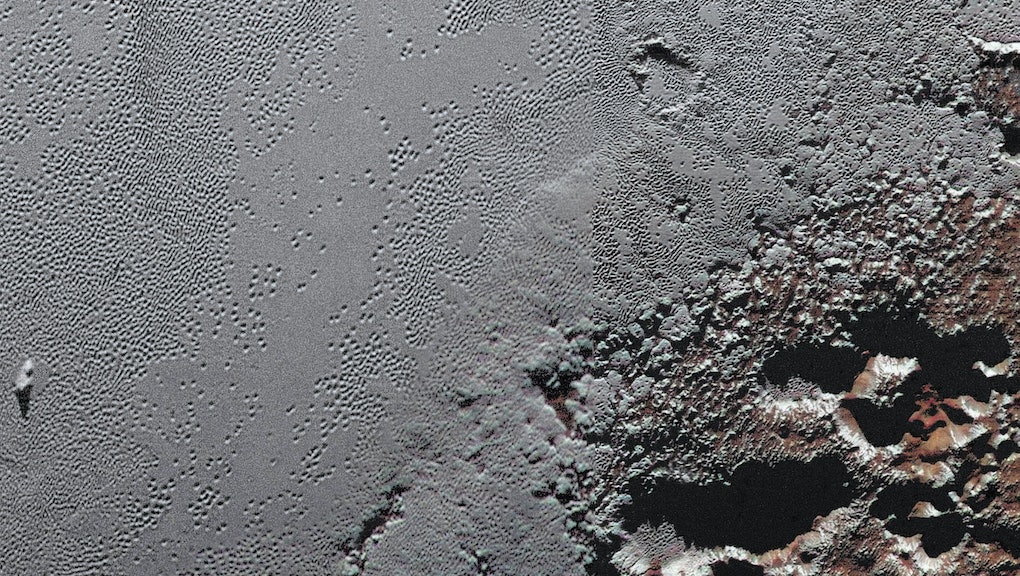 NASA Just Released One of the Sharpest Images of Pluto Ever

NASA has released one of the best images of Pluto yet. This one shows the dwarf planet's rougher side.

Right at the southern tip of Pluto's "heart," the smooth icy plain gives way to a patch of rocky highlands called Krun Macula.

"Krun" is the lord of the underworld in Mandaean religion, and "macula" is the name for a dark feature on a planet's surface, according to NASA.

Krun Macula towers about 1.5 miles over the heart-shaped plain. It features deep pits and valleys, some spanning more than 12 miles across and reaching depths of nearly 2 miles at the boundary with the plain. That's almost twice as deep as the Grand Canyon. But instead of a river, Krun Macula's pits bottom out into sheets of nitrogen ice.

Scientists believe the pits on Pluto formed when parts of the surface collapsed, but they aren't certain what caused the collapse.

This is one of the sharpest images we currently have of Pluto. The right part of the image was taken in July 2015 when the New Horizons spacecraft was 9,850 miles from the planet, and the left half from images captured a few minutes earlier, from 15,470 miles from Pluto.

"These data respectively represent portions of the highest- and second-highest-resolution observations obtained by New Horizons in the Pluto system," according to a NASA statement.

So while we won't see any higher-resolution images than this one, there's still plenty more data for scientists to sift through.

And New Horizons isn't finished yet. It now has a new target to visit, and it's even farther away than Pluto.