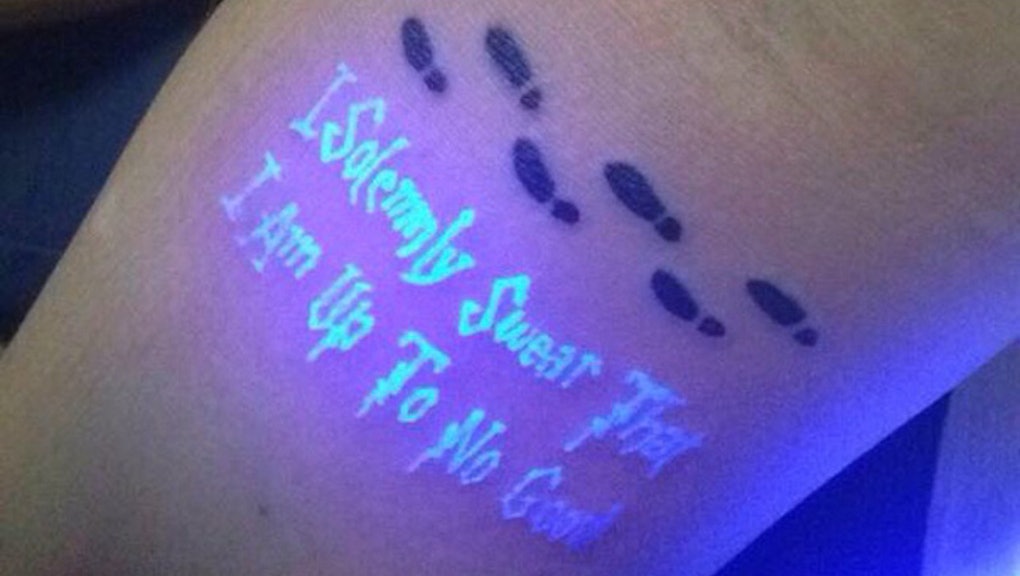 If you're still bitter that that you've never received a Minerva McGonagall-signed acceptance letter to Hogwarts, this Harry Potter tattoo might just make up for it.

An image of the tat, which has over 1 million views and counting on Imgur, shows footsteps above a quote that only appears with a blacklight, "I solemnly swear that I am up to no good."

The quote and steps refer to Marauder's Map, which was used to see people's whereabouts as they meandered the hallowed halls of Hogwarts. But not just anyone had the rights to the parchment, and in order to view it, one had to tap it with a wand and recite the very quote tattooed above.

Like the map, which to most appears as a blank piece of paper, mere muggles can only see the footsteps portion of the tattoo — unless they can magically get their hands on a blacklight, that is, and tap... er... shine it over this person's skin.

We've seen loads of Harry Potter tattoos before, ranging from the Deathly Hollows symbol to Harry's lighting bolt scar, but most aren't able to capture the sorcery like this hidden message tat does.

Many have commented on the photo, voicing the possible dangers of UV tattoos.

"There are risks with any tattoos, regardless of the method used or the type of ink involved," Dr. Joel Schlessinger, a dermatologic surgeon and RealSelf contributor, said in an interview. "The FDA doesn't regulate any type of tattoo ink so you never know what is being injected under your skin."

As for ultraviolet ink, Dr. Schlessinger says that it has been to known to cause allergic reactions or other rashes.

"Another cause for concern is many inks that glow in the dark contain phosphorus, a dangerous element that can be incredibly toxic to humans depending on where it's derived," he said. "Because tattoo ink is not regulated by the FDA, it can be difficult to know if the ink to be used contains even the smallest amount of phosphorus."

There you have it. It's a magical — but not so safe — idea. Mischief Managed.