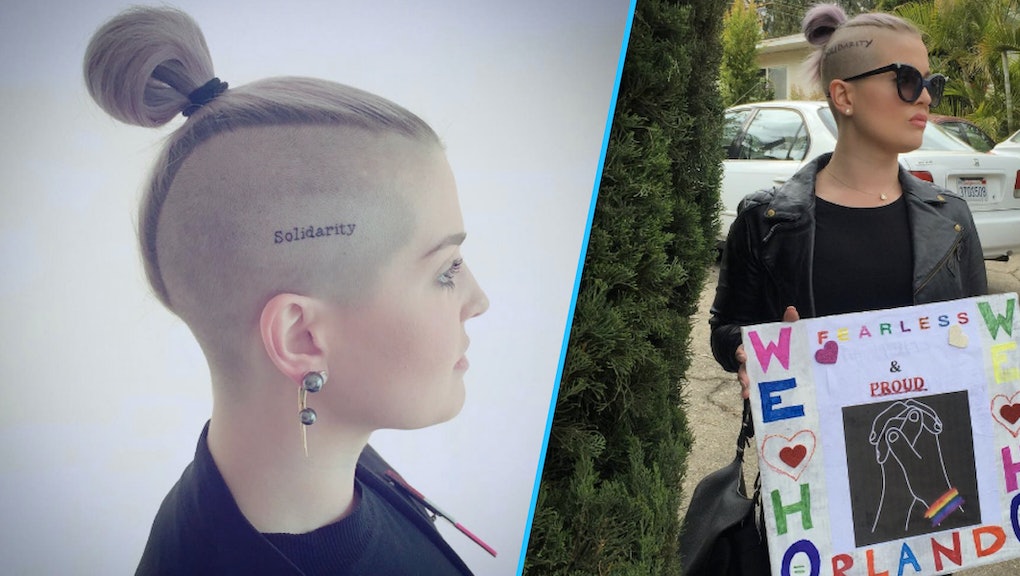 In the aftermath of Sunday's horrific massacre at Pulse nightclub in Orlando, many have donated blood, others attended vigils across the world and many have tried to cope with the situation by posting to social media.

But, for some, this wasn't enough; They felt that they needed to do something. And for a few, that something was opting for a permanent tattoo to remember what had happened.

On Tuesday, Kelly Osbourne, a longtime supporter of the LGBTQ community, posted an Instagram of her new tattoo on her shaved scalp that reads "Solidarity."

She started the caption with a definition of the term: "Unity of feeling of individuals with a common interest or purpose."

"Individually, we have rights and unique gifts," she wrote. "Together, we have strength and powerful harmony. I have wanted to get this tattoo for a long time. The tragedy in Orlando devastated me and reminded me that every moment of our lives is precious. Every human is precious. Love hard."

She continued: "Live gracefully, authentically and with conviction, respect, purpose and compassion. Together we achieve what is impossible to those who stand alone. Those of us who embrace and respect freedom stand together, progress together, celebrate together and grieve together. You are not alone."

On Sunday, the 31-year-old made a poster and wrote "solidarity" on her scalp before getting it permanently tattooed.

Osbourne isn't the only person flocking to tattoo parlors to honor the victims of the shooting.

Beau Ciolino, a blogger and writer living in New Orleans, had the date of the attack inked above one of his other tattoos that he had originally gotten in remembrance of all of the gay lives that had been lost throughout history.

"Following Sunday's tragedy, I got the date of the massacre added above my triangle as a reminder of the daily struggles of everyone in our queer family — and the lives lost in our LGBTQI community on a daily basis — in countries run by oppressive governments, in freedom riots and in Orlando," he said in an interview.

"The tattoo will act as my daily sign of gratitude and a symbol of love for all of those who've had to struggle and will have to struggle to reach a global acceptance of queer women, men and gender-nonconforming individuals," he explained, adding on Facebook, "the only way I see any positive changes coming about is if we're all a bit louder."

As Mic reported earlier this week, when terrible situations like this happen, it's normal to go through many different stages of grief, with one being anger. "It may be tempting to internalize your anger over the shooting. Instead, it's important to deal with those feelings," Terry Stone, the executive director at CenterLink, said in an interview with Mic's Jordyn Taylor.

Writing a letter to politicians, sending donations, signing a petition, volunteering at a LGBTQ community center, even getting a tattoo, are just some of the ways people can channel their anger, pain and sorrow felt after this attack.

"We've got to find the guts to stand up and say, 'I'm going to stand up for myself, my community and those I love at every turn,'" Stone said.