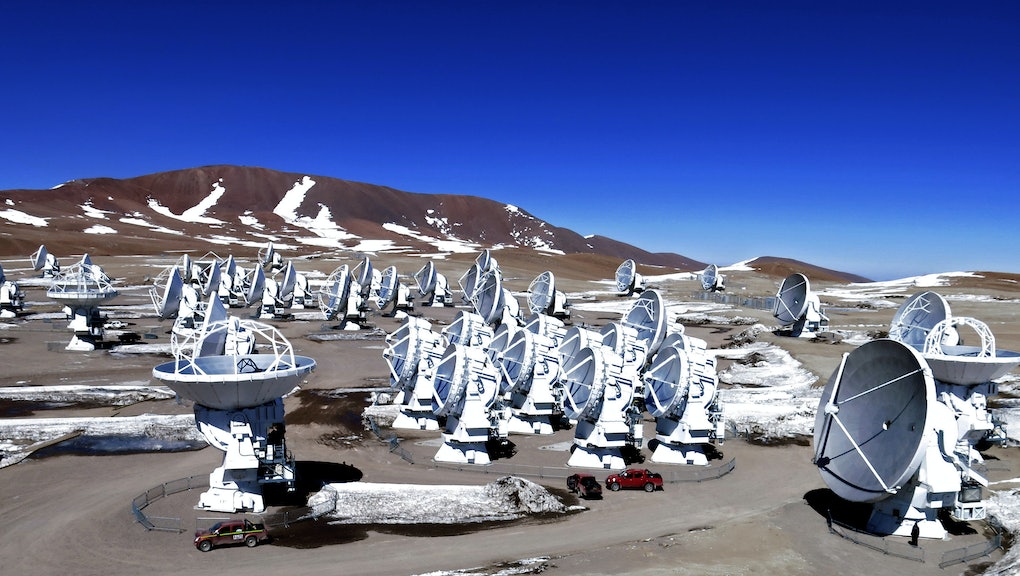 Astonomers Think We Won't Hear From Aliens for Another 1,500 Years

The fact that we haven't heard from aliens yet isn't so surprising. In fact, we shouldn't expect to hear from them for another 1,500 years, according to new research.

According to astronomers Evan Solomonides and Yervant Terzian, by then, our radio transmissions will have reached about half the Milky Way. That will significantly increase our chances of making contact with aliens.

Read more: The Fermi Paradox Explained: Why Alien Life Hasn't Found Us Yet

"It is actually unlikely that the Earth would have been reached by extraterrestrial communication at this point," the researchers wrote in a paper. "We predict that under 1% of the galaxy has been reached at all thus far, and we do not anticipate to be reached until approximately half of the stars/planets have been reached. We offer a prediction that we should not expect this until at least 1,500 years in the future."

Why aliens haven't found us yet: Their theory is trying to account for part of the Fermi Paradox. The Fermi Paradox is the problem that develops when we consider there are billions of Earth-like planets in the universe, but for some reason we haven't found any alien life forms yet.

According to their calculations and after taking the age of the galaxy into consideration, the researchers estimate there are fewer than 210 intelligent civilizations within the Milky Way. Humans are probably one of the first to develop radio waves, so we may to have to wait for the others to catch up.

"It's possible to hear any time at all, but it becomes likely we will have heard around 1,500 years from now," noted Solomonides in a press statement. "Until then, it is possible that we appear to be alone — even if we are not. But if we stop listening or looking, we may miss the signals. So we should keep looking."

Their theory has some big holes, though. The study hasn't been published in a peer-reviewed journal yet (just the preprint server arXiv), so we have to take its conclusions with a grain of salt. On the surface level, it's clear the research has some shortcomings. First, radio waves break down more and more the further they travel in space. That makes it less likely for distant aliens to detect our radio waves unless they're explicitly looking for them.

There are also many other ways that aliens might be trying to get in contact with us, however. Radio waves aren't the only option. Aliens might find our Voyager 1 probe, which has now escaped our solar system and reached interstellar space. Or aliens could be broadcasting messages in frequencies we can't pick up with our current technology.