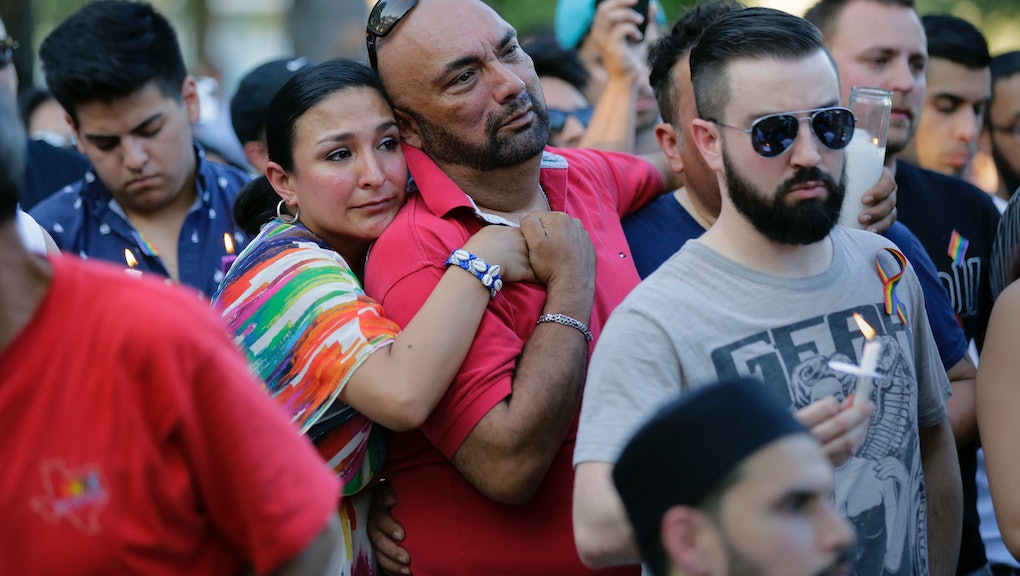 Silence Can Be Violence, That’s Why We Have To Talk About The Orlando Shooting

"I ought to shoot this motherfucker," a passenger shouted as I was traveling home from Manhattan to Brooklyn on a crowded A train a few years ago. The man — stocky build, around six feet tall — glared at me as I stood by the subway doors a few feet from where he was seated, ranting about "faggots" and how he would get rid of them if he could. I believed him, and was relieved when I jumped off at my stop a few moments later.

I wasn't sure why he pegged me as gay. Perhaps it was my dress: The neck of my button-up shirt was clinched with a bowtie and my jeans were fitted. But besides the intense fear I felt, what I remember most clearly about the encounter was the silence of the other passengers on the train. No one intervened.

It is the same silence I heard this week as people across the country responded to the mass shooting in Orlando, Florida. In the early morning of June 12th, a lone gunman fired a Sig Sauer MCX .223-caliber rifle into the crowd at gay nightclub Pulse, killing 49 people and wounding 53 more. It is now known as the deadliest mass shooting in modern U.S. history.

In response, legislators offered condolences all the while refusing to identify victims as LGBTQ. Pete Sessions, a Republican congressman from Texas, for example, was lambasted for failing to acknowledge that the shooting targeted LGBTQ people. "It was a young person's nightclub, I'm told. And there were some [LGBTQ ppl] there, but it was mostly Latinos," Sessions told National Journal's Daniel Newhauser. Senate Majority Leader Mitch McConnell, House Speaker Paul Ryan and several others also failed to identify victims as LGBTQ.

As David Weigel wrote at the Washington Post, "While gunman Omar Mateen's father suggested that anti-gay animus may have motivated him, only a handful of Republicans mentioned that aspect of the shooting; nearly every Democrat did."

The Orlando shooting was an exceptional act of violence, but it stems from everyday forms of institutional and individual bias — verbal abuse, employment discrimination, housing inequity, police profiling, and religious shaming LGBTQ people experience. "The disgust that the Orlando gunman Omar Mateen reportedly felt at seeing two gay men kiss in front of his son was political," Mic's Gabriel Arana wrote in the New York Times, "the product of a culture where leaders have for decades compared same-sex love to bestiality, portrayed gay people as threats to children and passed laws to stop them from adopting and even marrying."

Government was not the only institution to erase LGBTQ people from the massacre. The Roman Catholic Church, for example, failed to identify the victims as LGBTQ in a public statement offered by the Pope. The silence on the part of the Church is not surprising given its longstanding opposition to gay sex and relationships — to acknowledge the victims as LGBTQ would be to call attention to the Church's own antagonistic view of queer people. Mainline Christian denominations have also been called out for contributing to a homophobic culture.

Even the Cleveland-bred hip-hop star, Kid Cudi, publicly challenge the hip-hop community on Twitter for failing to stand up to prejudice. Cudi went as far as to suggest the hip-hop community "is the least outspoken about gay rights." While hip-hop is no different than any other genre in terms of its potential to be spread messages of bias, some hip-hop artists have used their platforms to disparage LGBTQ people. The messaging is harmful.

If we want to live in a country where gay nightclubs are not transformed into death chambers, we cannot be silent any longer. We have to wrestle with the connections between the mass shooting and the mundane discriminatory practices we condone by saying nothing.

We can't be silent as the state of North Carolina moves along with his rabidly discriminatory bathroom bill or as transgender people continue to be murdered without widespread public outcry. There's no place for silence in a moment after House Republicans blocked the passage of a bill, three days after the Orlando shooting, that would have protected employees of Federal contractors from being discriminated against on the basis of sexual orientation or gender identity. We can't be silent as religious leaders spread violent homophobic theologies. We have to write Congress, vote against discriminatory legislation, stop others when they use derogatory terms in our presence, and challenge our internal biases.

Silence feeds the type of culture that turn any of us into those who harm LGBTQ people. The lone gunman who killed 49 people at Pulse was shaped by a culture we sustain. If we remain silent about that truth, we will have more reasons to lament in the future.