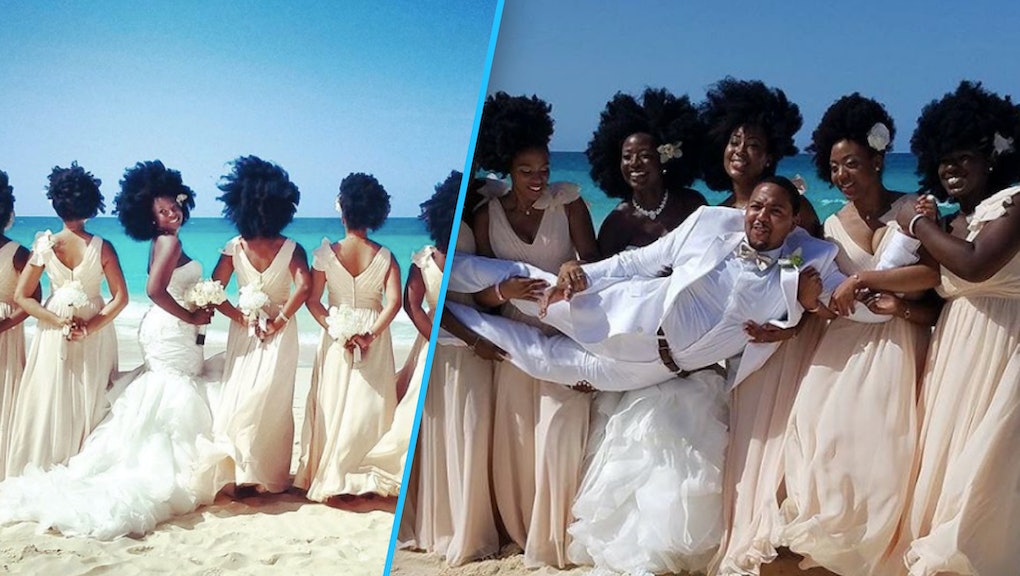 Some dig through wedding magazines like Brides and The Knot for hair inspiration before their big day. But 27-year-old Nakyia Whitty, who has been chronicling her natural hair journey on Instagram, knew exactly how she was going to rock her 'do before her nuptials last week.

Whitty, along with her six bridesmaids, all wore their hair natural for the beach ceremony that took place last week. She told BuzzFeed she had planned to have her bridesmaids do this even before she was engaged to her now hubbie.

"It was important to me as I value who I am," she said in an interview with Mic. I am so over hearing that the way my hair grows as a black woman can't be this or that. Even during the planning process I was told that I should straighten it for a more timeless and classic look."

Her inspirational wedding photos come at a time when young girls are still being sent home from school or called in to the principals office for wearing their hair natural. Outside of the classroom, women are sometimes scolded for their hair, and as Mic previously reported, a Google search of "unprofessional hairstyles for work" brings about women wearing their hair au natural.

Whitty herself has experienced this in the work field. "I learned to embrace, love and care for my hair in its natural form," she said. "It was so scary at first. I was ashamed at work... I felt as if it was 'unprofessional' or too 'ethnic.' One day I had to question who makes these rules and what kind of rule would shame the way my hair naturally grows?"

These photos are also a part of a larger conversation in the beauty industry as the attention is switching from a focus on straight hair to an increased inclusion of natural and curly 'dos.

It's viral posts like Whitty's — along with models, celebrities and brands — that are taking this discussion to the mainstream and raising awareness of the misconceptions and stereotypes that many women face based on something as seemingly unproblematic as a hairdo.

"Now that the photos have gone viral, I just hope that this is at least a crack in the tainted mirror that we, as black women who are natural or who are afraid of going natural because of how we will be seen, look into," she said. "It's beautiful. It can go for any occasion. There aren't any limits on our hair and that's what's most important... how we perceive ourselves."