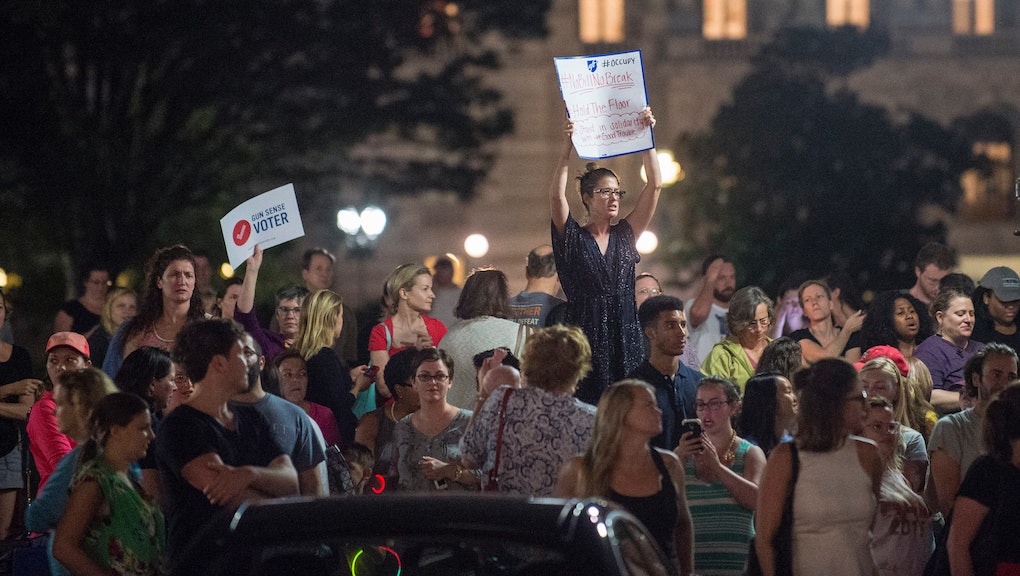 House Democrats End Gun Control Sit-In: "We Must Never, Ever Give Up or Give In"

Democrats ended a 25-hour long sit-in to push for a vote on gun control legislation Thursday afternoon, saying that while they did not succeed in pushing for a vote, they "must never give up."

"We must never ever give up or give in," Rep. John Lewis, the leader of the sit-in, said on the House floor. "We must keep the faith."

Lewis was surrounded by dozens of his fellow Democratic members of Congress, who occupied the House chamber in the hopes of forcing Speaker Paul Ryan to bring up a bill to ban those on terrorist watch-lists from buying guns.

The sit-in came in the wake of the massacre in Orlando, where 49 victims were killed and 53 others injured in the deadliest mass shooting in modern American history.

Republicans, including Ryan, called Democrats' sit-in a "publicity stunt" that politicized the deaths of Americans.

House Republicans did not join in the protest or relent on scheduling a vote on a gun control bill, and instead gaveled the chamber into recess until July 5.

Because the House was in recess, the cameras that feed images of the chamber to CSPAN were turned off, leaving Democrats to broadcast the sit-in themselves via Facebook Live and Periscope — an unprecedented move.

After wrapping the sit-in, Democrats exited to the House steps, where they greeted supporters.

In his speech, Lewis said he and his fellow Democrats will continue their push for gun control when the House returns on July 5.

We're "more determined than ever before," Lewis said, according to NPR.