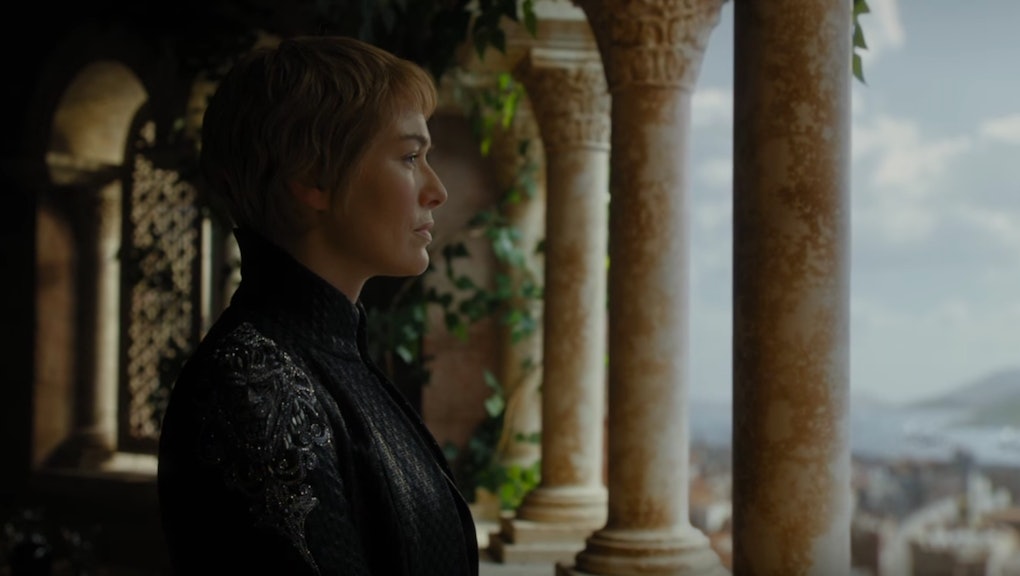 One of the understated moments of Ramsay Bolton's death in the "Battle of the Bastards" was the villainous void he left behind. Game of Thrones has steadily relied on a horrible villain to lead the narrative (that is, until the White Walkers are up to the task).

(Editor's note: Spoilers for the Game of Thrones season six finale ahead)

That role was first assumed by Joffrey Baratheon — a bratty, tween king with a fondness for torture and sexual violence — and was followed up by Ramsay until his death in season six's penultimate episode. Without Ramsay, it seemed like the newly introduced Euron Greyjoy might assume the role, but his on-screen presence thus far is sorely lacking compared to the books. If not, the White Walkers could finally be primed for the big stage, especially since Bran Stark will seemingly allow them to destroy the Wall and march through Westeros.

But in the season six finale, "The Winds of Winter," that answer was determined in a fiery blaze. Cersei Lannister is the show's new primary antagonist, and like Joffrey, will assume this mantle while sitting on the Iron Throne. For the rest of Westeros, that's a terrifying notion.

To get to this point, however, Cersei had to rid herself of a plethora of enemies in King's Landing. How convenient, then, that the High Sparrow ushered virtually all of them into the Sept of Baelor, for the trials of Loras Tyrell and Cersei.

As demonstrated in the chilling opening sequence from "The Winds of Winter," Cersei had no intention of going to her trial. Instead, with help of Qyburn and the little birds he inherited from Varys, she used the wildfire hidden under the Sept to get rid of everyone in one blazing, fell swoop.

Even on a show that doesn't shortchange its audience with deaths, it was one of the deadliest moments we've seen. Though Cersei was cautious with her son, King Tommen Baratheon, so that he wouldn't be at the Sept when it erupted, she neglected to factor in how he'd feel about losing the people he cared about.

Whether the affection the High Sparrow or Margaery Tyrell bestowed upon him was genuine or not, he believed it to be — and he witnessed their deaths from a similar vantage point as Cersei. However, as Cersei relished in her victory with a glass of wine — what else? —Tommen was left alone. Distraught, he removes his crown off-screen and jumps out of his window. And just like that, we've lost our third king in the series.

Unlike the deaths of her previous children, however, the onus falls on Cersei for Tommen's death. In her relentless quest for vengeance, she never thought to her son's wellbeing (or at the very least, checked in on him after the devastating event). Now, Cersei has never been a likeable character on the show — and she'd never be mistaken for a clear-cut protagonist — but what stopped Cersei from a complete villainous turn was her affection for her children. Whether misguided or not, she'd do anything in her power to take care of them.

However, the new Cersei — the one on the Iron Throne, no less — has no more children, and there's no way of telling how much her cruelty extends now that her humanity is removed from the character. We caught a glimpse of this new Cersei with her treatment of Septa Unella, and if it's any indication, it'll be far from a pretty sight.

Septa Unella, of course, is the nun who chanted "Shame!" during Cersei's Walk of Atonement, and generally mistreated Cersei while she was a prisoner at the Red Keep. But Cersei — who graciously spared Septa Unella from the explosion at the Sept so that she'd be able to torture her separately — and her torture of the Septa took an extremely disturbing turn. She indicates to the Septa that she has no plans of killing her immediately, and leaves her in a room with the zombified Gregor Clegane.

As the camera pans out from the room, we hear the shrieks of the Septa, and fans are unclear as to whether she's shrieking at the horror of Clegane's zombified face (he removed his helmet) or because he is raping her. While it's unclear, fans on the Twitterverse were concerned — especially given the series' controversial history with sexual violence.

If that was the show's inclination, then, it effectively places Cersei in the same light as Ramsay. If not, and it was just a run-of-the-mill torture of a nun, Westeros is still in trouble. That Jaime Lannister, the last character on the show who has any affection for her, is openly distraught at the sight of Cersei sitting on the Iron Throne encapsulates this feeling.

Cersei's character arc was never inherently positive, but she had redemptive moments with her children and Jaime — and drew the overwhelming sympathy of viewers during her traumatic Walk of Atonement last season. However, this new Cersei doesn't bode well for anyone in the Seven Kingdoms, and we can expect more heinous acts from her going forward in season seven.

The good news, however, is that Cersei's reign of terror is likely short-lived. Daenerys Targaryen is finally sailing to Westeros, and she's accompanied by her brother Tyrion (their relationship has been contentious from his birth) and Olenna Tyrell, whose sole purpose is to exact revenge now that her entire house was wiped out at the Sept.

It might not be an extended stay on the Iron Throne, but like her vengeance on the High Sparrow, we can expect a fiery conclusion, especially now that dragons will be thrown into the mix.