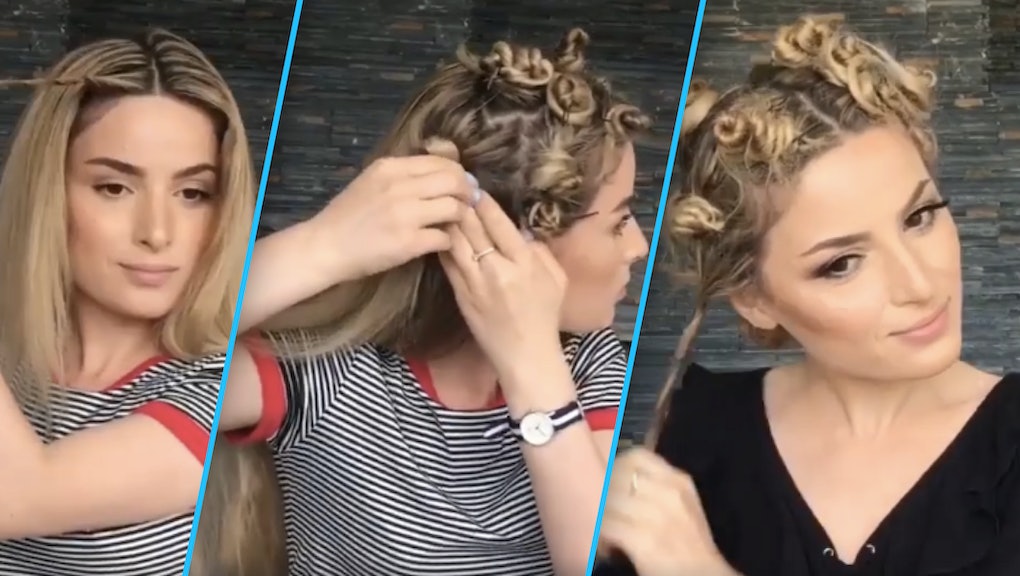 Gilan Sharafani, a beauty vlogger based in Norway, says that a lot of her subscribers were curious to know how she had gotten such big curls. To appease the curiosity, she made a "new tutorial" with her less-than-revolutionary technique. But, as many people have since pointed out, the "big heatless curls" method wasn't so novel after all; it's called Bantu Knots and has been used by African women for centuries.

"This is a highly requested tutorial, where I show how you can fake big curly hair with no heat," Sharafani captioned an Instagram post. The video, which was reposted by Girls Creativity, a Facebook page that often highlights makeup tutorials, has since garnered 21,000 shares and 6,000 comments, most of which call the vlogger out for cultural appropriation.

"They're called 'Bantu knots' if you must appropriate our stuff, please put some respect on the name," wrote Ebonie Dingle. "If your gonna steal our style at least keep its proper name which is Bantu knots. I never had a problem with white people admiring our styles and wearing it my problem is when they rename them like the "boxer braids" which are actually call cornrows," said Emmy Jarvis.

Others are posting photos of their own "big heatless curls."

"What BANTU KNOTS are supposed to look like," Courtney Odell captioned the below image. "Don't even try to say that birds nest on your head looks good. Ya'll so great at stealing our culture putting some blonde hair on it calling it something different and acting like you created it."

Many are pointing out that although it might be "acceptable" for white women to wear their hair like this, women with natural hair are often shamed for it.

"Oh you mean bantu knots you know the hair style that originated in Africa for Africans and was not widely accepted and deemed professional on blacks but they're perfectly fine for Becky?" Dominique Robinson commented on Sharafani's video.

"But when girls with naturally curly hair go out like this, with big frizzy curls, we are shamed, humiliated, accused of bad hygiene and, depending on race and class, maybe even fired," Krysta Beam wrote.

And they aren't wrong. Young girls are sent home from school and others are reprimanded in the workforce for wearing their hair natural. Just a few weeks ago, a woman entered a hair salon and was told her curls were "an animal that can't be tamed."

Sharafani has since updated the caption to her post on Instagram, writing, "For all of you commenting about what I shall call this style, I did not know that this was an African hairstyle till now. And I have never said that this is a new technique discovered by me! So if you want me to call it Bantu Knots, then it's Bantu Knots." Mic has reached out for further explanation and will update with a response.

As many Facebook users pointed out, the problem isn't so much the hairstyle as it is the lack of education and credit. From Kim Kardashian West's "boxer braids" and her half-sister Kylie Jenner's cornrows to Cara Delevingne's micro braids, as of late, many have been quick to claim that celebrities have started trends as opposed to properly crediting the African-American women that have been rocking these hairstyles for years.