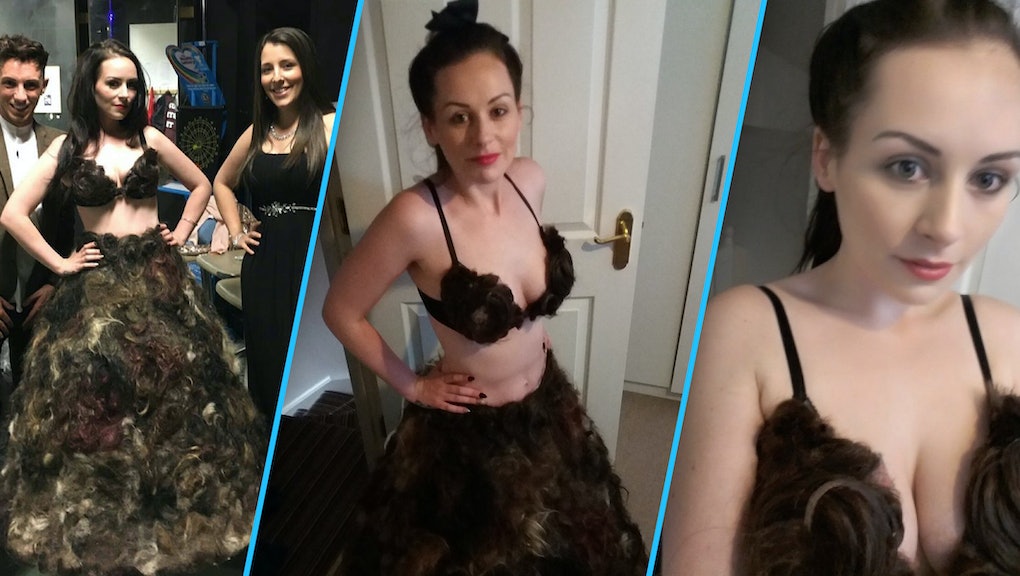 If your significant other is going to leave their pubic hair clippings in the toilet bowl anyway, you might as well get another use out of it by collecting and turning it into a pube-tastic dress, right?

Or, like Sarah Louise Bryan did, you can just ask strangers for donations.

In an attempt to make an outfit more disgusting than Lady Gaga's meat dress at the 2010 MTV Video Music Awards, Bryan, the British fashion designer, created a bra and skirt entirely out of pubic hair sourced directly from people on Twitter over the course (coarse?) of six months.

After looking at these photos, it's safe to say that Gaga has some stiff ... er ... hairy competition.

"I really wanted the world's most unique and disgusting design, so when someone sees a design they know it was me instantly," she told the Huffington Post.

There was mostly brunette pubic hair mixed with a bit of red and grey strands. In order to minimize the ickiness, Bryan sterilized it all before applying it to a pre-cut design.

Here's an example of what it looked like pre-dress. Appetizing, no?

Bryan says she's received quite a bit of hate, mainly from people uttering how gross it is, but she hopes to remind people what their clothes are made of or who might've had their hand in its creation — which is likely worse than humans' body hair.

"[I want people] to realize what century we live in and why are they're happy to wear things made by children and from cow skin and bull eyeballs but this revolts them," she said to Mic in an interview. "The hate makes me determined to keep on it."

You might not want to take your eyes off of Bryan just yet, as she has a bigger and better plan in the works. "I have another idea to top EVERYTHING," she said. "But I need to get on the MTV Awards red carpet, so tell them."

So what that idea be? Bryan is currently asking for sperm donations on Twitter. It might be a joke, but if it's any indication of what her next dress might look like, it's safe to say the pube dress might be the world's second most disgusting dress.