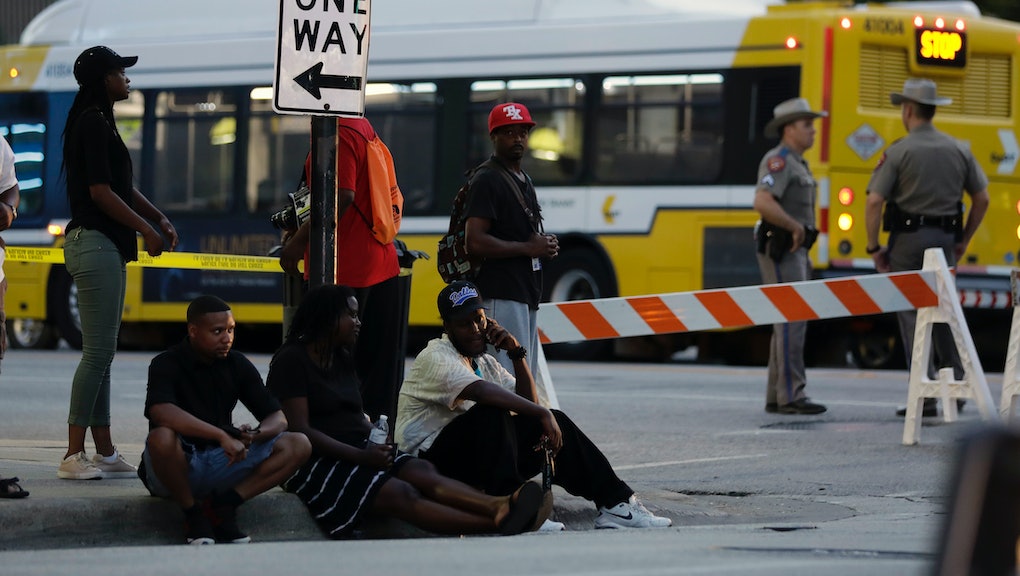 After Dallas, Public Figures and Random Racists Are Saying Exactly the Same Thing

Random online racists wasted no time linking the deadly violence against police in Dallas to a reportedly peaceful Black Lives Matter rally Thursday night. As officials began releasing details about the shooting that left at least five police officers dead and several others wounded, just one lone-wolf suspect emerged as a culprit — not a team of activists connected to the Black Lives Matter movement.

However, early reports of the violence drew irresponsible comments from politicians and other public figures, who placed the blame on President Barack Obama and Black Lives Matter activists.

Walsh wasn't alone in blaming Black Lives Matter for attacks carried out by an unaffiliated gunman. He sounded similar to a number of not-public figures who made racially insensitive remarks via Twitter on Friday morning. On Twitter, users compared BLM to the Nazi party and called them terrorists.

There was a political motivation to Thursday night's carnage, but the suspect did not link himself to any particular group. According to Dallas police chief David Brown, tactical officers engaged one now-deceased gunman who told them he was "upset about Black Lives Matter" and the recent police shootings that killed black men in Louisiana and Minnesota. The suspect also expressed anger toward white people and said he wanted to kill white police officers.

While there will always be random racists who might manipulate these details to fit their own agendas, more respectful responses should be expected from politicians and community leaders whose power and influence shape American lives.

Just hours before shots rang out in downtown Dallas, Obama urged the country not to politicize police shootings — including the deaths of Alton Sterling in Baton Rouge, Louisiana, on Tuesday, and Philando Castile near St. Paul, Minnesota, on Wednesday.

Some leaders rejected the president's guidance.

Rep. Roger Williams (R-Texas) blamed the president and activists for inflaming rhetoric that he said caused anti-police violence. "The spread of misinformation and constant instigation by prominent leaders, including our president, have contributed to the modern day hostility we are witnessing between the police and those they serve," Williams wrote in a Facebook post Friday.

During a CNN appearance Friday morning, Jeff Roorda, business manager for the St. Louis Police Officers' Association and the St. Louis County Police Association, blamed the heated political rhetoric around U.S. policing for the deaths of the officers. Roorda has been an outspoken critic of Black Lives Matter, given his proximity to protest sparked by the 2014 police-involved death of Michael Brown in Ferguson, Missouri.

"[The president] doesn't need to inject the divisive arguments like gun control at a time of great grief for the nation," Huckabee said, according to Politico. "What he ought to be doing is focusing upon those police officers and the sacrifice they made and solely on the police officers and the sacrifices of their family and leave all of the political discussions aside."