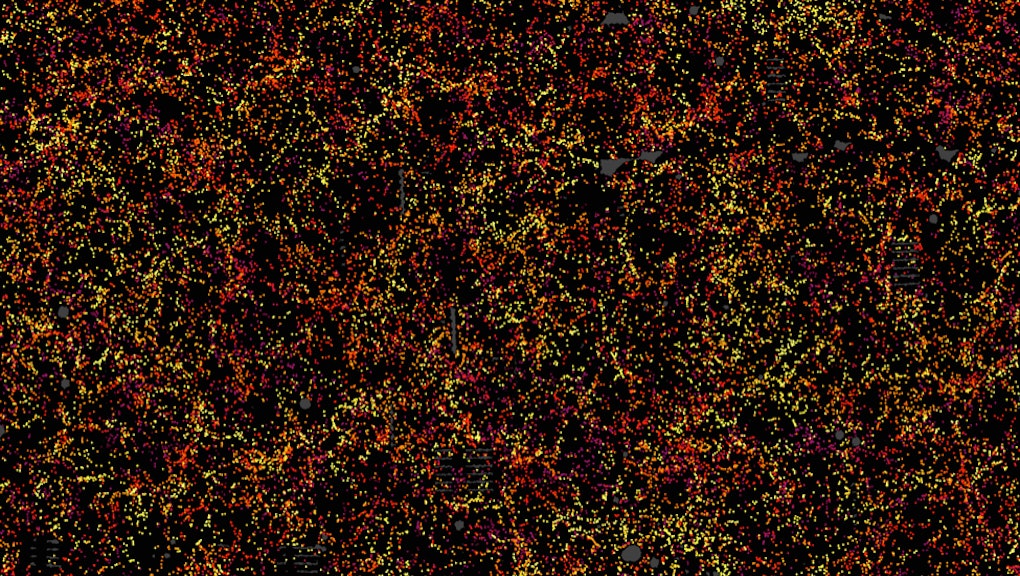 Behold 1.2 Million Galaxies in This Incredible 3-D Map of the Universe

Hundreds of physicists and astronomers collaborated to construct the largest 3-D map of the universe ever created.

The map includes a whopping 1.2 million galaxies, and it's the most accurate measurement we have of a mysterious force called dark energy that scientists believe is causing the acceleration of the expanding universe.

"We have spent five years collecting measurements of 1.2 million galaxies over one quarter of the sky to map out the structure of the universe over a volume of 650 cubic billion light-years," Jeremy Tinker, co-leader of the science team behind the map, said in a statement. "This map has allowed us to make the best measurements yet of the effects of dark energy in the expansion of the universe. We are making our results and map available to the world."

How scientists made the map

The map is based on the size of baryonic acoustic oscillations (BAO) within the 3-D structure of the universe, according to the Berkeley Lab. Scientists calculated a baseline "acoustic scale" for the BAO by measuring pressure waves that traveled through the universe when it was just 400,000 years old. Then scientists could map how galaxies moved over the next 13.79 billion years.

The map can tell us a lot about how dark energy fuels expansion, but it will also provide some insight into dark matter — the counter to dark energy that pulls matter together. The map shows the relationship between the two forces.

"In this map, we can see galaxies being gravitationally pulled towards other galaxies by dark matter," astrophysicist David Schlegel said in the statement. "And on much larger scales, we see the effect of dark energy ripping the universe apart."

This map sets the stage for even more detailed BAO measurements in the future Dark Energy Spectroscopic Instrument that will map an area of the universe 10 times larger than this one.