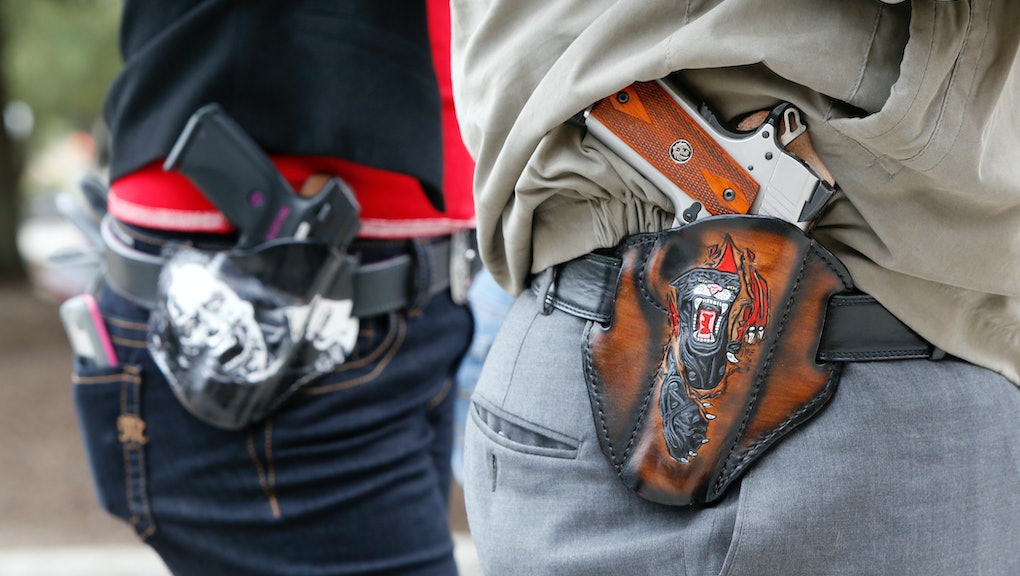 Where Is It Legal to Carry a Gun? List of States With Concealed-Carry Laws

Looking for a state that doesn't permit the concealed carry of guns? There isn't one, according to the Law Center to Prevent Gun Violence.

But concealed-carry laws in the U.S. vary between states, with some making it easier to strap-up than others.

Those distinctions are divided into categories: states that "may issue" and "shall issue" concealed-carry weapon permits and states where no permit is needed.

Here's how the Law Center breaks it down:

"May issue" states are those that can decide whether an individual can get a concealed-carry permit, so long as the individual meets that state's requirements. In some of these states, the individual applying for the permit is asked to show "a justifiable need to carry a handgun." Among gun rights advocates, these states are considered the most restrictive.

"Shall issue" states are those that have limited discretion and no discretion in whether to issue a concealed carry permit to an applicant. This means that so long as the applicant meets state requirements — which can include passing a safety training exam or a criminal background check — the permitting office cannot deny the applicant a permit.

States that require no concealed-carry permit at all — which are considered the least restrictive — include Alaska, Arizona, Idaho, Kansas, Maine, Vermont, West Virginia and Wyoming.

Although these restrictions can ebb and flow under the auspices of state legislatures, it is legal to carry a concealed weapon in all 50 states.