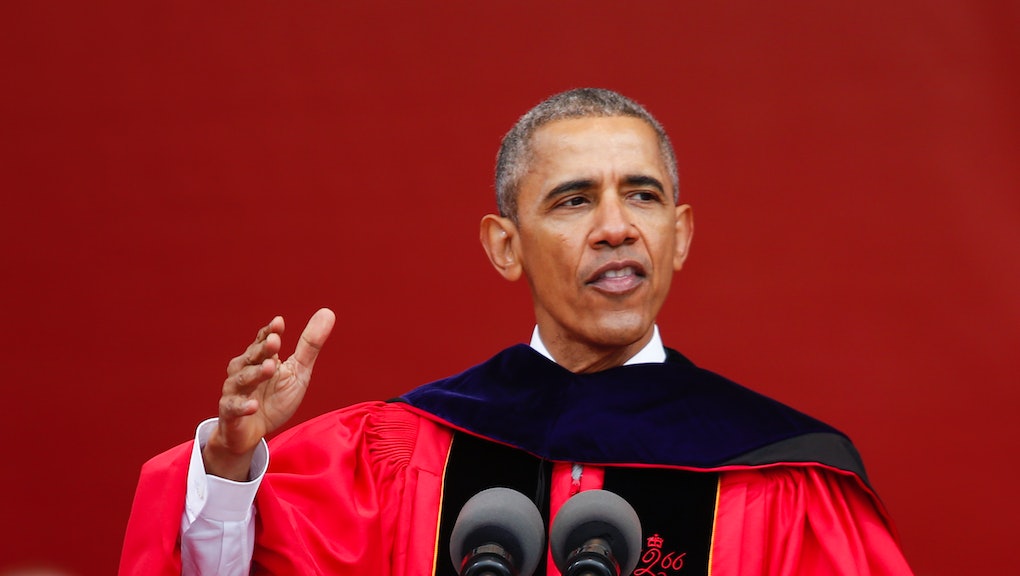 Barack Obama is often characterized as charismatic speaker. Before he became president, Obama had some practice addressing big crowds: He spent 12 years as a lecturer at the University of Chicago Law School, where he taught constitutional law and race theory.

Time will tell how Obama is remembered as a world leader. His legacy as a teacher, however, is almost unanimously positive. Students recall a thoughtful, passionate, challenging and socially conscious mentor who pushed liberals and conservatives alike to challenge their assumptions.

Obama was a popular lecturer

Obama split his time between teaching and the Illinois Senate, so he wasn't especially close with the other faculty members. But students consistently left him glowing reviews and high ratings as a lecturer, the New York Times and Time reported.

"There was a lot of give-and-take," former student Marta Lowe, who took his class "Current Issues in Racism and the Law" in the spring of 1995, told Time. "There was no pontificating from on high about what we should think. It was us organically coming up with kernels of wisdom."

Former student Jesse Ruiz recalls one class session that happened outside under a tree.

"Some claimed he was a bit too diplomatic, and would sit on the fence with some issues, but I never found this to be true," Ruiz wrote in the Guardian. "He always encouraged students to challenge everything, to stand up for what they believed in."

Time even found a copy of one of Obama's essay-style exams.

He taught a seminar-style class on racism and law

"Are there legal remedies that alleviate not just existing racism, but racism from the past?" former student Adam Gross wrote in his class notes from April 1994, according to the New York Times.

Obama didn't shy away from criticizing the left

Because Obama was a progressive politician, liberal students were keen to sign up for his class, but they often found their values and opinions challenged. The New York Times writes:

For one thing, Mr. Obama's courses chronicled the failure of liberal policies and court-led efforts at social change: the Reconstruction-era amendments that were rendered meaningless by a century of resistance, the way the triumph of Brown gave way to fights over busing, the voting rights laws that crowded blacks into as few districts as possible.

Obama described his teaching years fondly in his book The Audacity of Hope. Time included an excerpt:

I loved the law school classroom: the stripped-down nature of it, the high-wire act of standing in front of a room at the beginning of each class with just blackboard and chalk, the students taking measure of me, some intent or apprehensive, others demonstrative in their boredom, the tension broken by my first question — "What's this case about?" — and the hands tentatively rising, the initial responses and me pushing back against whatever arguments surfaced.