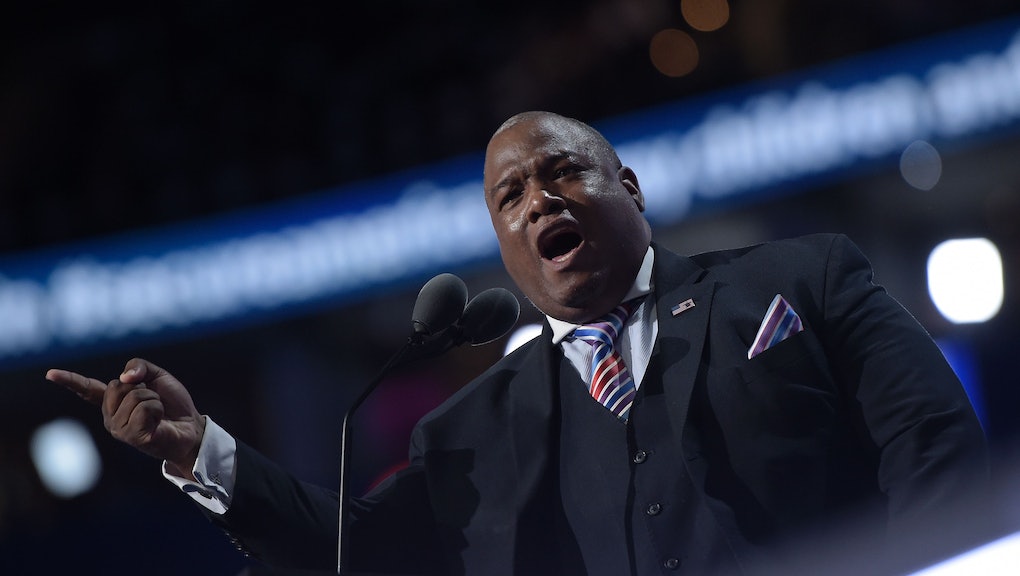 Pastor Mark Burns fired up delegates and attendees of the Republican National Convention's final night in Cleveland, offering his unequivocal endorsement Thursday of Donald Trump as the presidential candidate who will bring about racial and socioeconomic equality.

Burns, who is black and leads the Harvest Praise and Worship Center in Easley, South Carolina, denounced the tactics of activists in the Black Lives Matter movement that in the last few years has shone a national spotlight on police brutality and black inequality.

"Despite the color you were born with, here in America, the only colors that matter are the colors red, white and blue," Burns roared during his rousing convention speech.

After his remarks, Mic caught Burns outside of the donor suites at Quicken Loans Arena, where he said BLM activists hadn't followed the example set by civil rights icons who came before them. "We need to follow the spirit of Dr. Martin Luther King, of unity and love," Burns said.

"Yes, there's issues in some minority communities and I spoke on it today. I don't agree with [Black Lives Matter] tactics ... but I understand that frustration has birthed this type of protest. There is a better way to do it."

Burns cited an oft-quoted speech from King about being judged by the content of one's character and not by skin color, as a means to deemphasize racial identity in the pursuit of equality. In his speech, he told the crowd that the only colors that matter are "red, white and blue."

But there's a lesser-known, lesser-cited King speech that doesn't jive with Burns' interpretation of his legacy. In the speech, King implored blacks to embrace their heritage and reject efforts to water down the scope of black struggle:

Be proud of our heritage ... we don't have anything to be ashamed of. Somebody told a lie one day. They couched it in language. They made everything black ugly and evil. Look in your dictionaries and see the synonyms of the word 'black.' It's always something degrading and low and sinister. Look at the word 'white.' It's always something pure, high and clean. Well, I want to get the language right tonight. I want to get the language so right that everyone here will cry out: 'Yes, I'm black, I'm proud of it. I'm black and I'm beautiful!'

But Burns maintained his message of colorblindness, saying that poverty and inner city crime in places like Chicago and Baltimore should concern all U.S. citizens. "That should not be a black issue," he said. "It should be an American issue. It shouldn't just be Black Lives Matter protesting. It should be all Americans who believe there's injustices that take place."

Burns spoke on the fourth night of the GOP's nominating convention, where speakers took aim at presumptive Democratic presidential nominee Hillary Clinton, law and order in U.S. cities and the threats of terrorism around the world. The final night of the convention was reserved for speeches from Trump, his daughter Ivanka Trump and RNC Chairman Reince Priebus, among others.