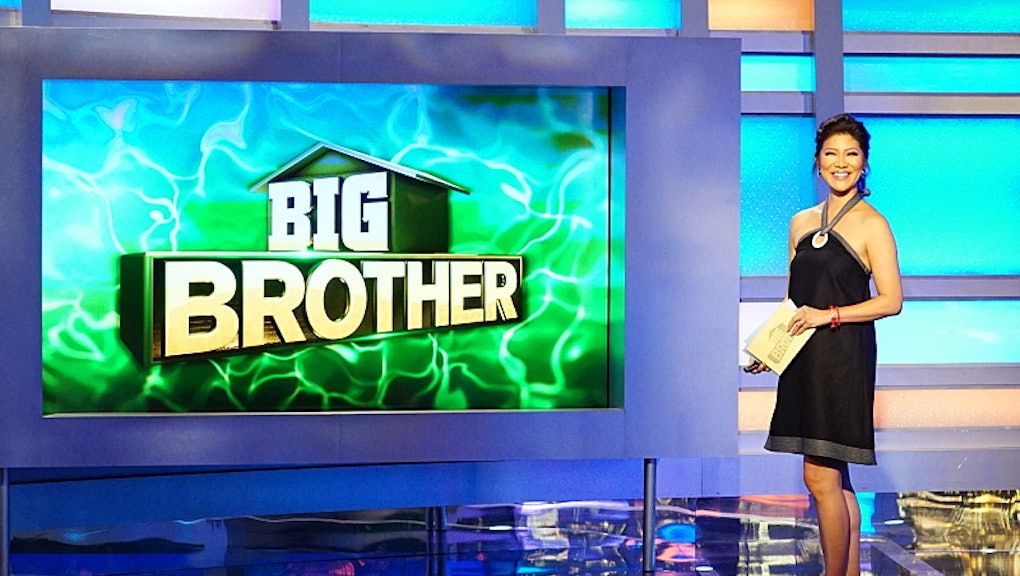 'Big Brother 18': Michelle Wins the Power of Veto — Did She Use It?

"It wouldn't be Big Brother if everything were just puppy toes and rainbows," James said, and we couldn't have said it better ourselves. After James completely goes back on his promise from last week — nominating Frank and Bridgette — he's clearly ready to start some drama.

After a pretty fake "no hard feelings" conversation between Frank and James, the Veto competition is underway.

Recurring competition opponent OTEV is back, this time in the form of a frog. In this competition, OTEV gives the contestants a clue relating to a past moment from the season, and the houseguests have to go searching for a record that corresponds to the clue and bring it back to the lily pad at OTEV's feet. Each time, there's one fewer lily pad and someone is eliminated.

Michelle (who's apparently called "Meech" now?) slips while trying to climb back up to OTEV, resulting in a pretty hilarious fall.

Despite the setback, Michelle ends up winning the competition, giving her the Power of Veto. The entire house cheers her on against Frank and Bridgette. It's clear where everyone stands at this point.

Frank doesn't go down without a fight, though, and tries to convince Michelle to use the Power of Veto and flip the house.

The Fights and Veto Ceremony

Paul confronts Frank for pulling other people aside to talk game after the Veto Competition. The whole thing is awkward. Frank says he's obviously going to talk strategy with people since he's up for eviction, and Paul is paranoid that he's being set up to get back-doored (he's not).

Then James calls a house meeting, supposedly to clear the air. Not much is said, except that Frank publicly admits to wanting to get Da'Vonne out, and Paulie tells Frank the odds are completely stacked against him.

In the end, Michelle ends up not using the Veto, and says in the Diary Room that while the rest of the house clearly wants Frank out, she's gunning for Bridgette.

The next episode airs Thursday at 9 p.m. Eastern on CBS, when viewers will learn whether Michelle gets her way, or Frank, as expected, is shown the door.