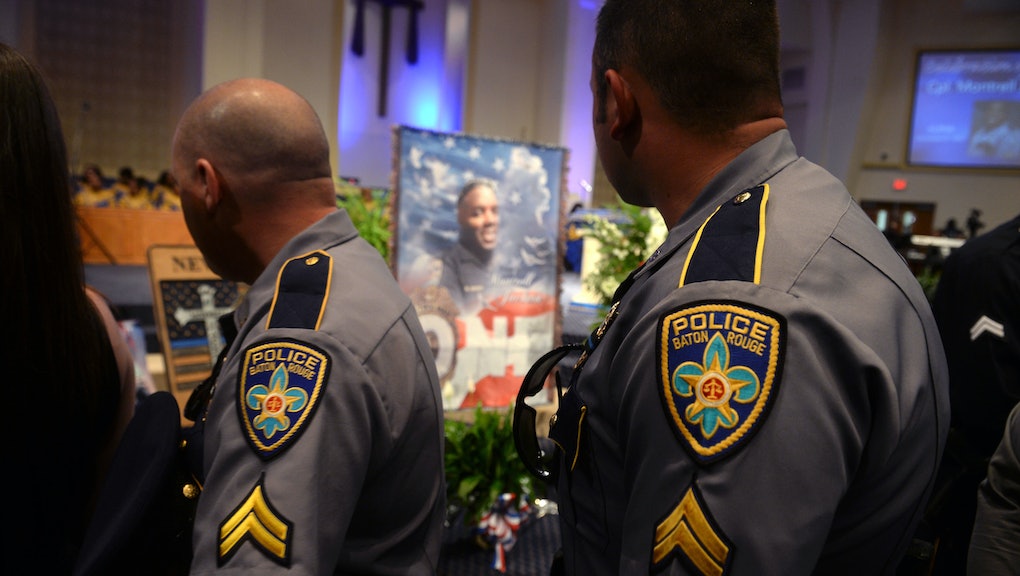 Blue Lives Matter Hate Crime Laws: These States Are Trying to Make a Non-Thing a Thing

Hate crime: a criminal act "that manifest[s] evidence of prejudice based on race, gender or gender identity, religion, disability, sexual orientation or ethnicity."

That federal definition — built around this country's history of marginalizing and terrorizing people of color, immigrants and LGBTQ people — apparently isn't good enough for lawmakers in a handful of state legislatures trying to add police officers as a protected class.

Republican and Democratic lawmakers in California, Delaware, Kentucky, Maryland, Missouri, New Jersey, New Mexico, New York and South Carolina have recently introduced so-called "Blue Lives Matter" legislation, according to the National Conference of State Legislatures. It's similar to the law Louisiana enacted in May, which establishes protections for officers and other first responders if their attackers are motivated by hatred of their occupations.

In the wake of the July assassinations of officers in Dallas and Baton Rouge, Louisiana, it can appear as though police officers are experiencing an unprecedented threat level. Several people, including sworn officers, have lashed out and expressed their frustrations with the Black Lives Matter movement's rhetoric on policing.

But with statutes to discourage violence against public servants already on the books in nearly every state in the U.S., Blue Lives Matter laws are a solution in search of a problem.

According to the National Law Enforcement Officers Memorial Fund, the number of total law enforcement officer fatalities from January to July was up 8% compared to the same period in 2015. Overall, officer deaths by assailants have decreased in the past two decades and were down by an average of 10 per year of the Obama presidency, compared to predecessor George W. Bush.

Those statistics haven't discouraged members of Congress from trying to pass federal versions of the state legislation. Two weeks before the Republican National Convention in Cleveland, House members introduced the "Blue Lives Matter Act of 2016," which would amend Chapter 13 of Title 18 in the U.S. code to "make an attack on a police officer a hate crime."

Should officers ever win these protections at the federal and/or state level, perhaps activists should lobby for a law that classifies racial profiling by police as a hate crime.