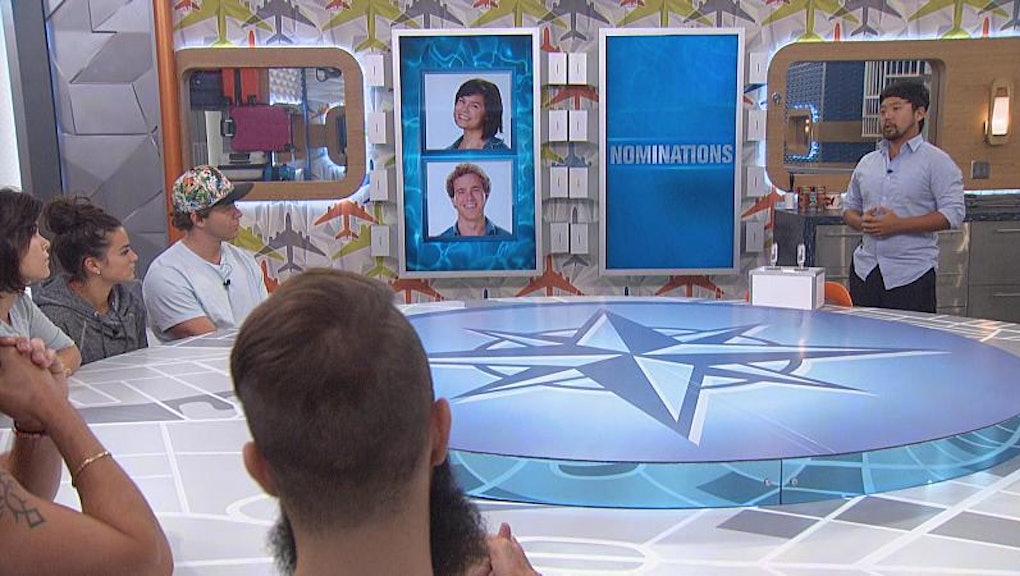 Throughout the week, the Big Brother houseguests seemed set on evicting either the dictator (Frank) or his cabbage patch kid (Bridgette). After Michelle won the Power of Veto on Wednesday night's episode, she chose not to use it, seemingly sealing their fates. But would the surprise secret room twist save one or both of them?

On Thursday episode, Michelle reiterates how much she wants Bridgette out of the house. "If she wins HOH, I'm going up," she says. This escalates inside the storage room, where she is seen bawling her eyes out to Frank. "I really like you as a person, I don't want you to leave," she exclaims mid-whimper.

The words "clues to the secret are all around you" appear on a screen in the house, prompting the houseguests to go on a manhunt for answers. Paul finds the code "Call Paris" on an airplane and proceeds to type in "Paris" on the nearby payphone. He successfully figures out the secret but wasn't able to head straight into the room because of the droves of people listening nearby.

After attempting to keep Frank and Bridgette as far away from the phone as possible, he slips into a tunnel that leads him to a Paris-themed room.

Inside, the contestants are told to choose a "Big Brother Airlines" envelope. If the houseguest is evicted, they will open the envelope onstage with host Julie Chen. One of the 12 envelopes contains a round-trip ticket that can send an eliminated houseguest right back into the house. (The envelopes are in play until Aug. 16.)

After Paul, the rest of the houseguests manage to crack the code and enter to claim an envelope. But, not everyone is excited about the idea of one of the evicted contestants re-entering the house. "My life was a lot easier without Paris," Da'Vonne says.

After Frank tells Julie, "See you in five minutes," in his last statement before the vote, he is indeed unanimously kicked out of the house by a 9-0 vote.

Frank's secret room envelope contains a one-way ticket and does not send him back into the house. "I got a big mouth and I was too trusting," he says of his mistakes this season.

In a competition called "Perfect Shot," each houseguest has a red ball and yellow ball. They have to slide the red ball up a skinny wooden board to the other end into a box. They can practice as many times as they want with the yellow ball, but it is final with the red one. But, if you spend too much time practicing, someone can send their red ball across and win the competition before you do.

The episode ends with the contestants continuing to practice.

Toward the end of the episode, Julie revealed that each week America will be able to visit the Big Brother website and vote on which contestant they'd like to see receive some type of advantage, or "America's Care Package." This week's reward is a never-not pass, meaning a contestant cannot be a have-not for the rest of the season.

Fans will learn who wins the HOH competition, and who is nominated, Sunday at 8 p.m. Eastern on CBS.