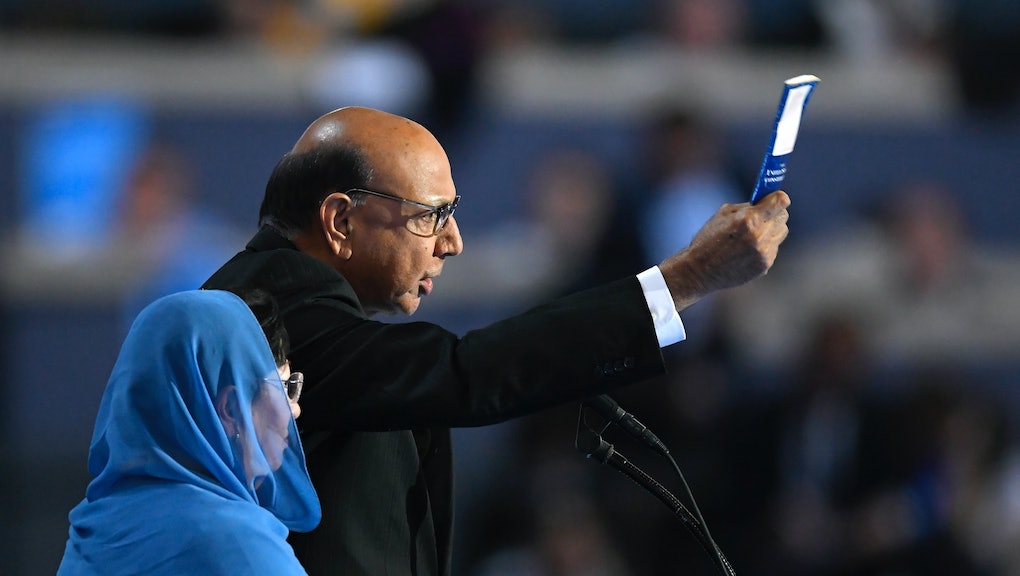 That's about what it costs to own a pocket-sized copy of the U.S. Constitution — like the one Khizr Khan waved in a stinging rebuke of Republican president nominee Donald Trump on Thursday at the Democratic National Convention.

Khan, the father of Muslim soldier Army Capt. Humayun Khan, who was killed in Iraq in 2004, rejected Trump's Islamophobic rhetoric and the candidate's calls for banning Muslim immigration to the U.S., as an anti-terrorism strategy.

"Donald Trump, you are asking Americans to trust you with their future," Kahn said at a crescendo of his remarks at in Philadelphia. "Let me ask you, have you even read the United States Constitution? I will gladly lend you my copy."

Khan cited language in the Constitution that establishes principles of equality and discourages discrimination.

The first section of the 14th Amendment to the U.S. Constitution spells out what is known as the equal protection clause:

There are several places to find a pocket copy of that clause and all other articles and amendments of that historic document.

The National Constitution Center, a museum in Philadelphia, sells pocket-sized constitutions at a price of $2.50. They can also be ordered online.

Oak Hill Publishing Company has a pocket-sized constitution online at PocketConstitution.org, at a price of $3.95.

For the fancier folks, Amazon lists a leather-bound pocket-sized constitution, at about $25 per copy.

So the next time someone questions whether discriminating against people on the basis of religion is constitutional, whip out your copy and take Khan's lead: