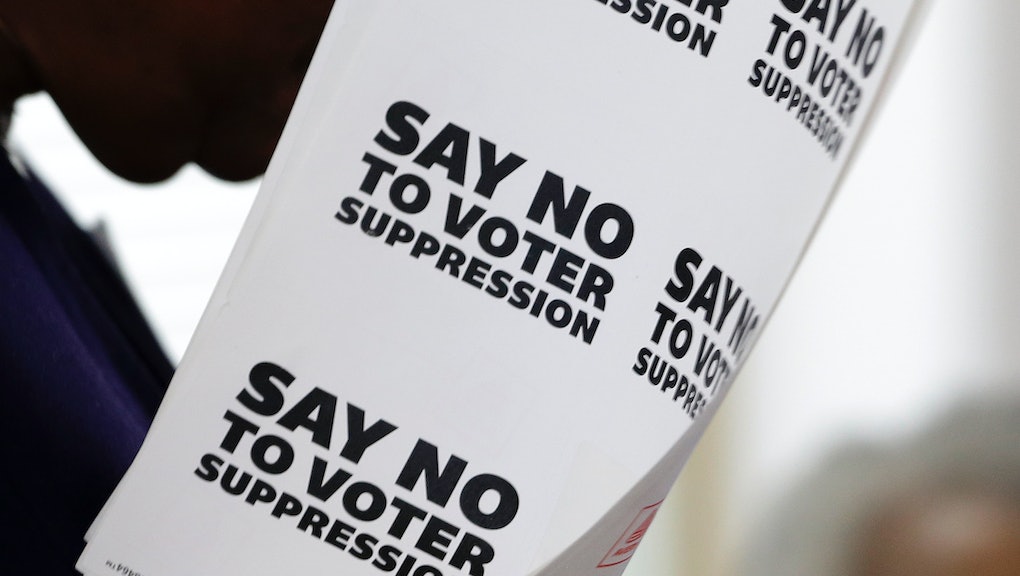 A federal appeals court on Friday blocked changes to North Carolina's election laws that required voters to show strict forms of ID at polling places, narrowed the ways eligible voters could register to vote and shortened of early voting periods.

A three-judge panel of the Fourth Circuit U.S. Court of Appeals issued a stunning victory for African-American voters, who argued they faced an increased number of voter suppression tactics from the state's conservative-led legislature.

"We can only conclude that the North Carolina General Assembly enacted the challenged provisions of the law with discriminatory intent," Circuit Court Judge Diana Gribbon Motz wrote in the panel's opinion. The decision means North Carolina's restrictions will not be in place for the upcoming presidential election on Nov. 8.

Civil rights groups and the U.S. Department of Justice had argued that barriers to the polls were placed in front of black voters as that bloc's influence increased following the 2008 and 2012 presidential election years.

Hailing the court's decision, Attorney General Loretta Lynch said she was "pleased" that the judge panel saw the law as discriminatory, even after a lower court allowed the rules to remain in place during the 2014 midterm elections and during the state's presidential primary. North Carolina's law "targeted African-Americans 'with almost surgical precision,'" Lynch said in a statement Friday, citing language in Motz's opinion.

The attorney general added: "The ability of Americans to have a voice in the direction of their country — to have a fair and free opportunity to help write the story of this nation — is fundamental to who we are and who we aspire to be."

Following the U.S. Supreme Court's decision in 2013 to gut a provision of the 1965 Voting Rights Act mandating federal approval of voting law changes in states with a history of racial discrimination at the polls, North Carolina lawmakers changed state elections laws in ways that, objectors said, targeted Democratic and minority voters.

Soon after the Shelby County v. Holder decision, the state Legislature banned same-day voter registration, rolled back early voting periods by a week and prohibited out-of-precinct voting. This resulted in officials throwing out approximately 1,600 ballots that were cast in the wrong precincts, the Washington Post reported. About 12,000 people who tried to register on the same day as the election were turned away.

Early voting and voter ID requirements are especially significant to African-American voters, as many in the community participate in "souls to the polls" campaigns, in which black churches bus members to elections offices to cast ballots on the Sunday before Election Day. Many of the eligible, elderly voters may have also lacked the form of ID required by the changes to election law, even though they had been voting with ID for decades, advocates have said.

Friday's decision seemed to indicate a national momentum toward protecting voting rights. On July 20, the Fifth Circuit U.S. Court of Appeals struck down the Texas' voter ID law on grounds of discrimination.

But the lack of election law pre-clearance under the Voting Rights Act still means that advocates can't stop the vast majority of suppressive measures, a spokesman for the Leadership Conference on Civil and Human Rights said in an email on Friday.

"Shelby ushered in a resurgence of discriminatory voting changes, allowing politicians across the country to choose their voters instead of having voters choose them," Leadership Conference president Wage Henderson said in a statement Friday.

Currently, there are two bipartisan pieces of legislation aimed at restoring the Voting Rights Act that have stalled in Congress. Unless lawmakers act, the upcoming general election will be the first one in 50 years without historic voter protections, Henderson said.