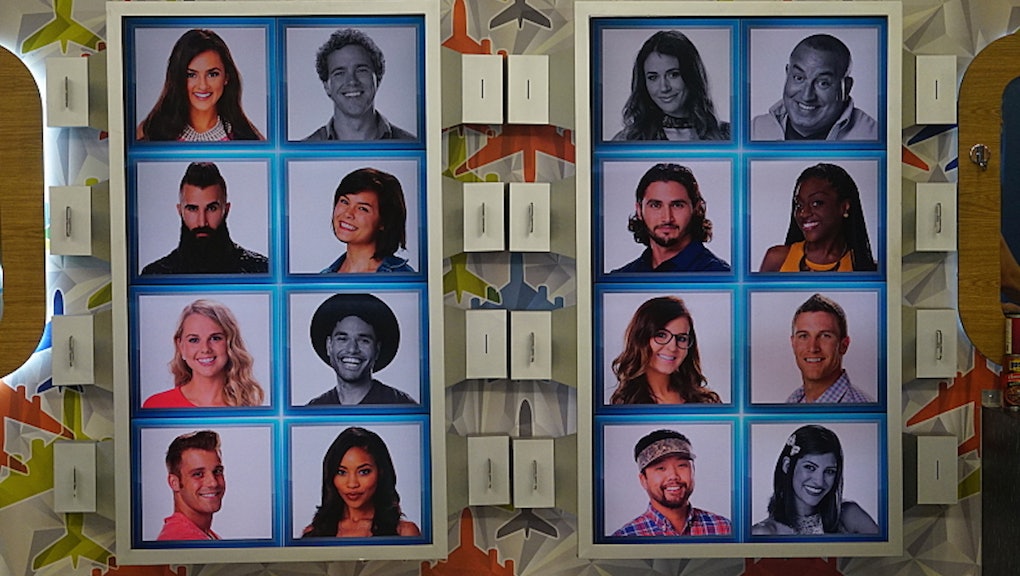 'Big Brother 18' Turns Into the Paulie and Paul Show

Thursday night's episode of Big Brother sent Frank home by unanimous vote, while the rest of the contestants battled for Head of Household in the "Perfect Shot" competition.

To recap the competition rules:

Each houseguest has a red ball and yellow ball. They have to slide the red ball up a skinny wooden board to the other end into a box. They can practice as many times as they want with the yellow ball, but it is final with the red one. But, if you spend too much time practicing, someone can send their red ball across and win the competition before you do.

As the competition picks up during Sunday's episode, most of the contestants voice how important winning this HOH is for them. Paulie, on the other hand, says, "I don't want to win this," and quickly rolls a six with his red ball while the rest of the houseguests continue to practice.

Victor rolls his red ball next, lands it on a 14, and takes over the lead from Paulie. Then comes Paul who rolls the highest number: 21, which puts him in the lead. Bridgette is then eliminated with a 10 and Natalie with a two. Corey's rolls off the board, earning him zero points, Nicole is ousted with a 19, and Zakiyah, also with a zero. The last two contestants, Michelle and Da'Vonne, lose with 16 and 19 respectively.

Paul is crowned HOH and quickly voices his plan to kick out the other half of "Fridgette," or Frank and Bridgette. But, in the Diary Room, Paulie suggests that he might try and change Paul's mind because there are "bigger fish to fry" in the house. Who, exactly? Da'Vonne.

"l'm going to try and convince [Paul] to get Da' out of here," Paulie tells James and Corey. When he brings the idea to Paul, Paul reiterates that he needs to get Bridgette out.

Now, Paul just needs to find a pawn nominee — one who, unless something goes wrong, won't be eliminated — to sit next to her on the block. Nicole offers and quickly regrets it.

Bridgette goes to Paul and Paulie to try and take the attention off of her and put it on Nicole and Da'Vonne. Paul reassures her in case she comes off the block or Da'Vonne goes on it and is then evicted, so that he could say "I told you so," to Bridgette.

Before the nomination ceremony, Paul is worried that Nicole isn't "strong enough" to be a pawn, and Paulie offers to go up instead. Now that's true PP (as Paul and Paulie are now calling themselves) friendship.

Natalie receives the first care package — voted on by America — via parachute. Inside is socks and a never-not pass. Next week's package will give one houseguest the ability to prevent two other contestants from voting in the next week's eviction ceremony.

Paul nominates Paulie and Bridgette for eviction. "I made a promise to finish the job this week," Paul tells Bridgette.

Fans will learn who wins the Power of Veto Wednesday at 8 p.m. Eastern on CBS.