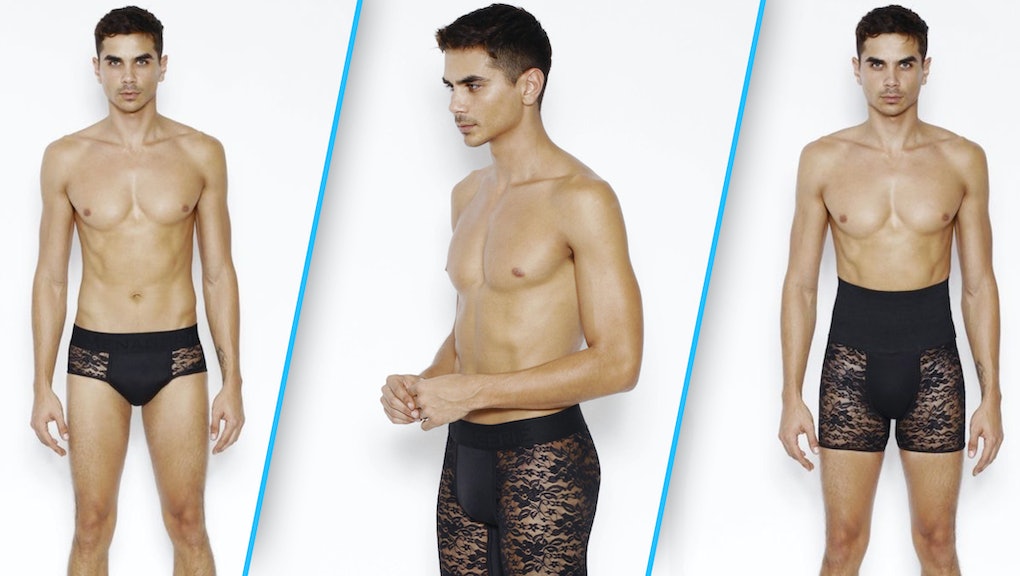 At Long Last, Lingerie For Men Now Exists. So Take That, Victoria's Secret.

Lingerie is a multi-billion-dollar industry built on a sky-high pile of push-up bras, seamless underwear and thongs that your mother hates. Thanks in large part to Victoria's Secret, it's been women alone who have been marketed to when it comes to silky, lacy, provocative lingerie created to ensure that all of your assets look top notch.

That is, until now.

Gay men have been wearing thongs and other traditionally feminine underwear for a long time, but it's never been made to appeal to a straight woman. At long last, underwear that looks "feminine" is being marketed to straight, cisgender men, not for the purposes of crossdressing, but for the sole purpose of looking sexy — and dude-ly — as hell. In other words, men may finally understand just how tricky it is to wear lace and not rip it to shreds.

And you know what makes it even better? The first company that's tapping the men's lingerie market is called "Menagerié," because who says your underwear can't have a sense of humor?

"Created to revolutionize how men feel about their intimate apparel needs, Menagerié intends to change the way men think about their underwear and how they can look in them," the brand's website reads, by "providing a unique collection of lingerie exclusively for men."

Menagerie's first collection consists of black satin and lace briefs, boxers, boxer-briefs, robes and button-down shirts that the company calls "formal nightwear." Although there is certainly more room to be creative, this is at least a start.

"Designing has always been in the back of my mind. When I decided I was ready to pursue design, I wanted to develop a concept that wasn't heavily explored," Roman Sipe, Menagerié's founder, told Refinery29. "I decided that I would start in my own closet when looking for ideas. What was missing? Was there anything I didn't currently own that I wanted?"

The answer to that question was, of course, "lingerie." Although high-end designers like Versace and Calvin Klein have created satin and lace underwear for men before, there was no easily accessible, quality and stylish brand for men who wanted to spice things up in their underwear drawer. Before Menagerié, the closest thing to high quality lingerie targeted towards cis straight men were cutesy thongs that made a man's genitalia look like an elephant's trunk.

Now, straight men are being marketed a pair of boxers that can feasibly match their partner's negligee.

"I was shocked to see that more than half of the orders placed were by women," Sipe told Refinery29. "Whether they were buying for themselves, their significant other, or their best gay friend is beyond me. I also noticed a lot of women tagging guys on Instagram in our posts, saying things like, 'OMG, I could see you in these!' or 'This made me think of you.'"

What this line goes to show is that straight men are slowly getting attention across various different spheres within the fashion world that were once reserved solely for women, from male body positivity and celebrity collaborations to now even waist trainers for men.

"Most don't think they need it, or couldn't see themselves actually buying a pair of lace underwear," Sipe concluded. "However, there are a few who find it intriguing and simply ask things like, 'Well, are they comfortable?'"

Although these pieces are undoubtedly for men just starting to get a feel for lingerie themselves, they're catching on quickly — several pieces in the line, which range from $70 to more than $300, are already sold out. By merely existing, Menagerié sets the standard for what lingerie for men actually looks like, so maybe, some glorious day in the future, we'll be able to see even more sexy thongs for a man, or a corset or, hey, even some leopard print too.