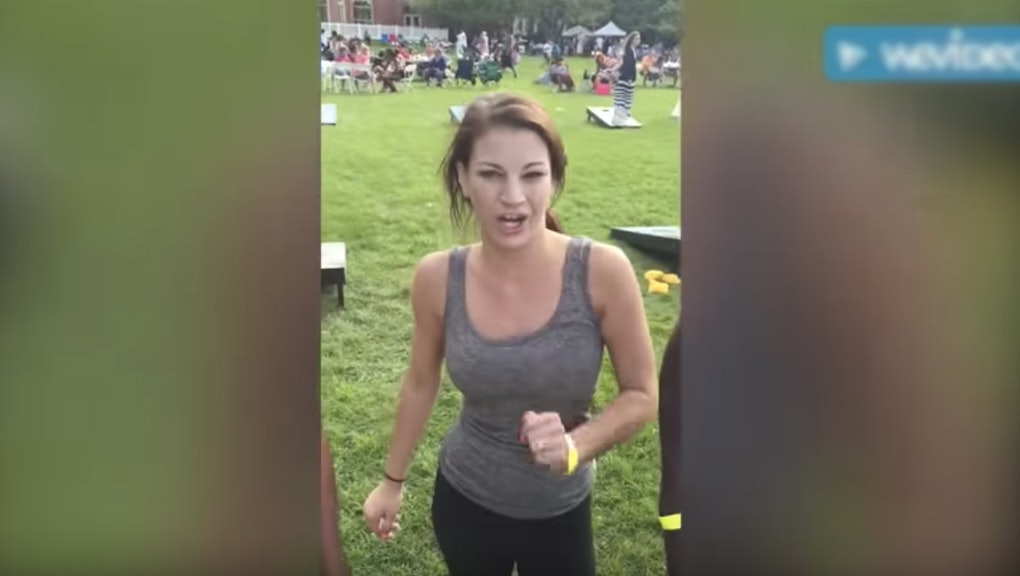 For months, Ernest and Cassie Crim had been looking forward to enjoying Chicago's Margarita Festival, an adults only outing on the city's scenic South Shore held the weekend of July 30- 31. The Crims, both teachers at a local high school, said Saturday's event would have been their "last summer hurrah before we went back to school."

But hopes for a relaxing time were shattered for the couple, who is black, after a white woman swung at them, hurled a racial epithet and spat in their direction. The Crims caught the entire disturbing incident on camera and posted it to YouTube the next day. Now they're seeking charges against the unnamed woman.

In an email, a spokesperson for the Chicago Police Department said that festival security removed the woman from the event, and also confirmed that the Crims filed a simple battery report against her, but declined to release the woman's name. Mic was unable to independently verify the woman's identity.

As of Monday, detectives were still investigating the incident, the spokesperson wrote.

The 54-second-long video shows the woman approach Cassie, 30, and Ernest, 28, shortly after the two had attempted to join in on a game of cornhole, in which players toss small bean bags at a game board. Cassie explained that they moved to pick up a stray beanbag when the woman, who was playing on the set next to them, rebuffed them and almost immediately began shouting obscenities.

"What's your problem? Say it again," Ernest told the woman, before she smacks his smartphone out of his hand. He is seen picking the phone up when the woman unleashes a string of epithets. "If you hit me you're a nigger," the woman replied.

At that point in the video, the woman is seen standing between two African-Americans that the Crims identified as friends of the woman. "What type of people are y'all?" Ernest asked them. "It don't bother us," one of them replied.

Before the video ends, the woman is seen spitting in the Crims direction. The woman's saliva landed on her arm, Cassie said in a phone interview Monday.

She and Ernest said the ordeal left them feeling helpless. Both of them feared the possibility of losing their teaching jobs and their children, ages three and one, had they responded to the woman with violence.

"I was humiliated after that," said Cassie, who was moved to tears over the incident. "We had a lot to think about. We're educators. We're black. We had too much going for ourselves to stoop to that level."

Cassie added that she did not believe the woman's behavior could be dismissed as simple inebriation. "She was not drunk to the point of not being accountable for her actions," Cassie said.

Organizers cautioned guests against consuming too much alcohol at the event, with the festival's website warning that "any visible signs of public intoxication will result in security escorting any and all patrons off the premises."

Chicago is better-known for gang and drug violence than incidents motivated by hate. According to the Chicago Police Department, the most recent available records for racial hate crimes show a jump from 13 in 2010 to 24 in 2011, in a city of 2.7 million people.

At a time when racial tensions seem to be strained between minority groups and whites — the police-involved shooting deaths of black men in the last years have sparked protests nationwide, in recent weeks — the Crims said they worry that their experience is a sign tensions are getting worse.

"I feel like the history and the climate of this country had already nurtured the [anti-black] mentality that she had," Ernest said. The Crims decided to share the video online as a reminder of that history.

"In this day and age, I just wanted to get her on camera so I can expose how ignorant she is and was," he said.