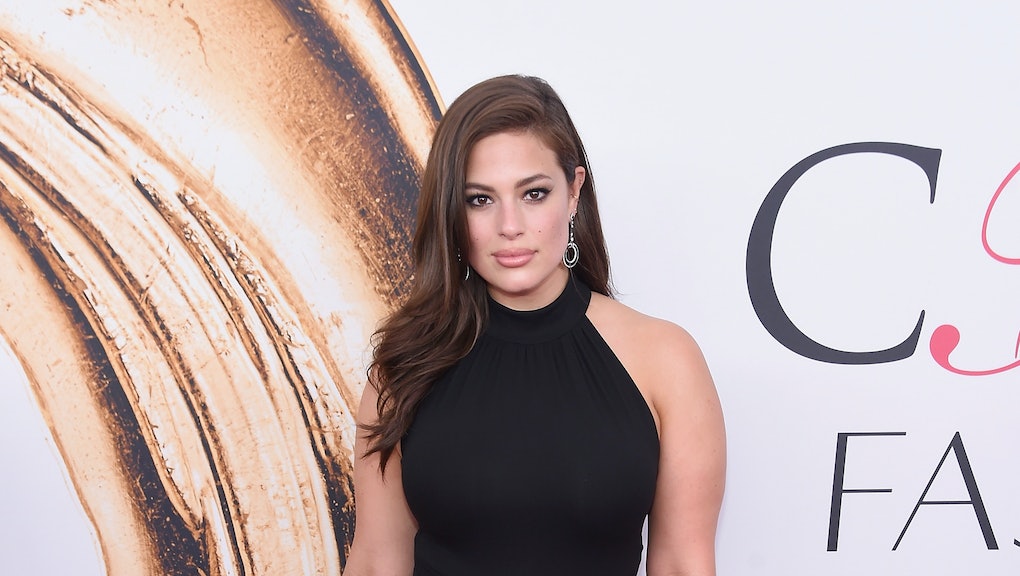 Supermodel Ashley Graham can't seem to post an image on Instagram without getting comments ranging from "fake fat person" to "you believe being skinnier is prettier." Whether she looks too thin or too curvy, the body shaming trolls are rampant for all to see — and Graham is 110% over it.

Although she accepts the reality that there will always be negative comments, Graham became especially frustrated when, in July, she posted an image of herself in a white two-piece outfit.

"I'm a confident woman with thick skin, and as a model in the public eye, I'm conditioned to accept criticism," she wrote in an essay for Lenny Letter. "But last week, I admit that I had a tougher time brushing off the haters. While I was on set filming America's Next Top Model, my hairstylist snapped a picture of me... It was one of those photos where you look and say to yourself, 'YESSSS, HONEY! I look damn good!'"

The image quickly went viral — it currently has over 108,000 likes — not because she looked good, but "because of people's misguided views on women's bodies and who owns the rights to them," she explained in her essay.

As Mic reported when Graham originally posted the photo to Instagram, over 1,000 comments quickly rolled in suggesting that she had lost weight, then insinuating that this was a form of betrayal. Mic reported that Graham responded in an Instagram comment at the time, writing, "People come on my page and body shame me because I'm too big, because I'm too small, because I'm not good enough for their standards... But at the end of the day, I'm good enough for me. Angles will make anyone look bigger or smaller and I just happen to know mine."

So that's all it was: an angle. In fact, Graham wrote in her essay that she hasn't lost a pound this year. "I'm actually heavier than I was three years ago, but I accept my body as it is today," she said. "I work out not to lose weight but to maintain my good health. And anyway, if I did want to lose weight, it would be no one's decision but my own."

Graham has come to realize that she will always be "too much" of something to someone. "To some I'm too curvy," she wrote. "To others I'm too tall, too busty, too loud, and, now, too small — too much, but at the same time not enough."

She adds: "When I post a photo from a 'good angle,' I receive criticism for looking smaller and selling out. When I post photos showing my cellulite, stretch marks and rolls, I'm accused of promoting obesity. The cycle of body-shaming needs to end. I'm over it."

"Why waste time and energy spewing negativity? Let's worry about our own bodies."

And she's especially over it when it comes from other women, something that has been all too common as of late, and not just for women in the public eye. "No matter how many empowerment conferences, TED talks and blog posts are out there, women keep tearing one another down over physical appearance," she wrote in her essay. "Body shaming isn't just telling the big girl to cover up. ... It's giving 'skinny' a negative connotation. ... What type of example are we setting for young girls and their self-esteem if grown adults are on Instagram calling other women 'cowards' for losing weight, or 'ugly' for being overweight?"

So why doesn't Graham just stop reading the comments? Because social media has helped build her career, fan base and community. "Social media has given me a voice and allowed me to further my platform as a body activist," she writes. "My followers are the first people I turn to for feedback on anything I do."

She continues: "I am here for all women who don't feel comfortable in their skin, who need a reminder that their unique bodies are beautiful. ... However, I refuse to let others dictate how I live my life and what my body should look like for their own comfort. And neither should you."

"I refuse to let others dictate how I live my life and what my body should look like for their own comfort."

The next time you see another woman taking a selfie or posing in a bathing suit, Graham wants you to encourage her and not give her side-eye because she's "feeling herself." "We can't create change until we recognize and check our own actions," she said. "Why waste time and energy spewing negativity? Let's worry about our own bodies."

She ends with the powerful statement, "My body is MY body. I'll call the shots."