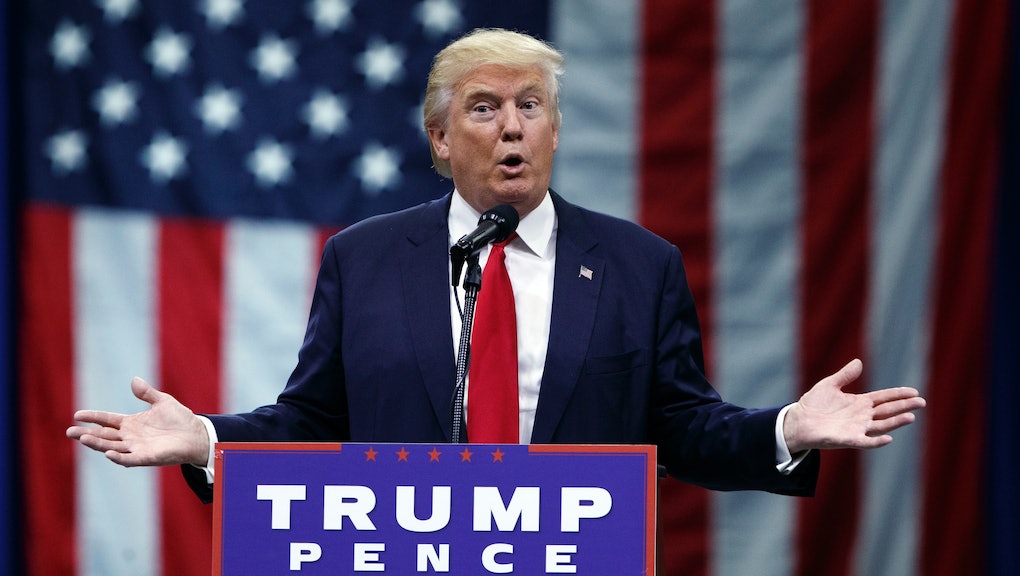 In 1968, thousands of American men burned their draft cards, refusing to fight in a controversial war in Vietnam to which they were politically and morally opposed.

Donald Trump was not one of those men.

Back then, Trump was a 22-year-old who had just graduated from the real estate program at the University of Pennsylvania's Wharton School of Finance and Commerce. According to the New York Times, he was the picture of perfect health — 6'2" and athletic enough to play football, golf, tennis and squash. As a teen, he'd even enrolled in the New York Military Academy, where he later bragged that he got "more training militarily than a lot of the guys that go into the military."

But when it was time for Trump to actually serve in the military, he balked and received a medical deferment for having bone spurs in his heels — the first of five deferments that kept Trump away from Vietnam's battlefields, according to reporting from the New York Times.

The irony, of course, is that Trump's feet have been good enough to carry him onto stages across the country where he's repeatedly denigrated Muslims and Muslim Americans. Most recently, he's gotten into a very public and humiliating squabble with Khizr and Ghazala Khan, whose son U.S. Army Capt. Humayun Khan died fighting in the Iraq War in 2004.

Khan is just one of scores of Muslim American soldiers who've lost their lives fighting for a country from which Trump has argued they should be banned. In fact, Muslim soldiers have fought in all major U.S. wars, and more than 5,000 are currently serving in the military. Here are some who paid the ultimate price:

Capt. Humayun Khan was 27 when he was killed in Iraq.

Spc. Rasheed Sahib was born in Guyana and died fighting in Iraq on May 18, 2003, when he was 22 years old. Salon later ran a long feature about the circumstances of his death.

Capt. Mohsin Naqvi, who was born in Pakistan, enlisted four days after 9/11 and died while served in Afghanistan on September 17, 2008. He was 26 years old.

Maj. James Michael Ahearn was an 18-year military veteran who was killed on July 5, 2007. He was 43 years old. "I never realized saving the world was so damned hard," he wrote in correspondence with family members before his death, according to the Los Angeles Times.

Staff Sgt. Ayman Taha was born in Sudan and lived in Virginia. A special forces engineer, Taha was killed in an explosion in Iraq on Dec. 30, 2005. He was 31 years old.

Sgt. Kendall Damon Waters-Bey was 29 when he was killed in a helicopter crash near the Kuwaiti border in 2003. He left behind a wife and a 10-year-old son. "He was always making faces, making people laugh," Michelle Waters, his sister, told the Guardian. "And he loved to barbecue — ribs, especially."

Spc. Azhar Ali was 27 when his Humvee was hit by a roadside bomb in Iraq in 2005. Like Trump, Ali hailed from Queens, New York, and his cousin later told the New York Times that he "never said no" to an assignment.

Staff Sgt. Daniel Isshak was 25 when he was killed on Oct. 3, 2006, while fighting in Iraq. The Los Angeles Times memorialized his death.

Spc. Kareem Rashad Sultan Khan was 20 when he died in 2007 in Iraq. He was honored with a Bronze Star and a Purple Heart, two of the military's highest combat honors.