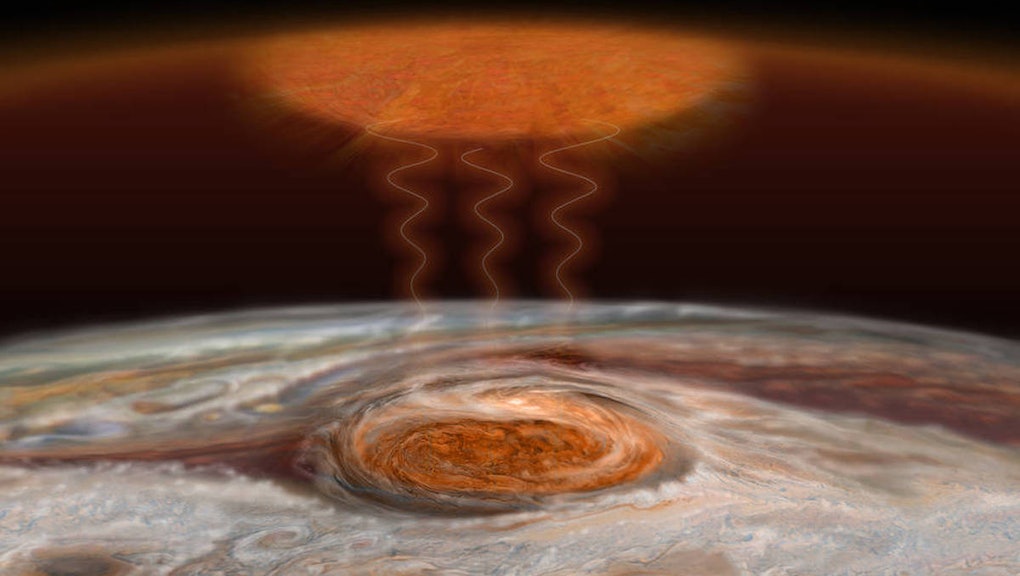 Now, new evidence suggests the spot isn't just a storm: It acts like a red-hot stove burner that warms the atmosphere above it.

Scientists found the average temperature in the upper atmosphere above the red spot is a sizzling 1,600 degrees Kelvin (about 2,420 degrees Fahrenheit).

Scientists have long wondered why Jupiter's upper atmosphere is so hot.

Jupiter's temperatures are comparable to what we see in Earth's upper atmosphere — which is puzzling because Jupiter is much farther away from the sun than Earth. That distance suggests something besides the sun is warming Jupiter's atmosphere.

"We could see almost immediately that our maximum temperatures at high altitudes were above the Great Red Spot far below — a weird coincidence or a major clue?" James O'Donoghue, lead author of the study, said in a statement.

O'Donoghue and his team found evidence that the Great Red Spot generates two types of turbulent energy waves: gravity waves and acoustic waves. These waves produce a lot of heat that warms the atmosphere above the storm.

"The extremely high temperatures observed above the storm appear to be the 'smoking gun' of this energy transfer," O'Donoghue said in the statement. "This tells us that planet-wide heating is a plausible explanation for the 'energy crisis,' a problem in which upper-atmospheric temperatures are measured hundreds of degrees hotter than can be explained by sunlight alone."

We see this same phenomenon on Earth over the Andes Mountains, according to NASA.

The Juno spacecraft that just arrived at Jupiter will get several chances to see the red spot up close over the next few months — and find out even more.